Alison at The Polohouse is showing favorite chairs on her "Favorites on the First" series this month.  I love chairs, especially those with family history.  We have a few family chairs -- 12 to be exact -- but this one probably has the most interesting story about how we acquired it. 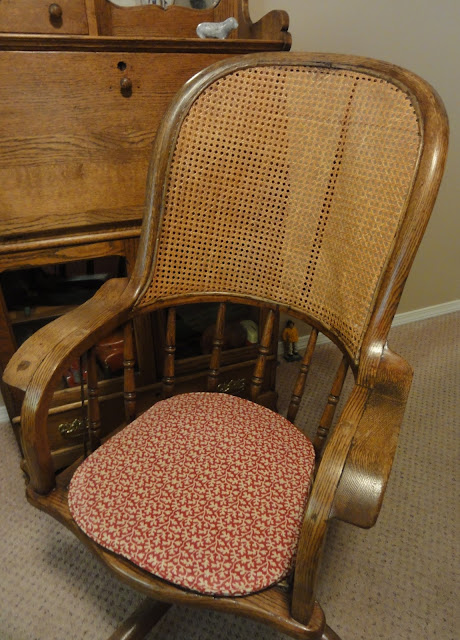 In the 1890s, my step-great-grandfather who I never knew was a judge in Prowers County Colorado.  His son married my maternal grandmother when my mother was a child. 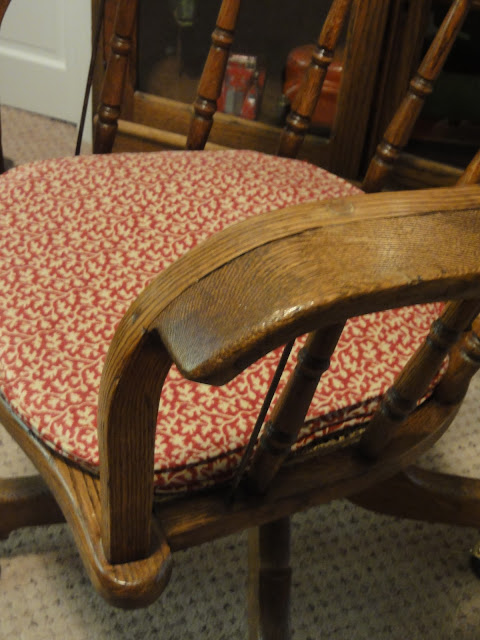 In the 1950s - 1960s, my husband's uncle worked in maintenance in the Prowers County courthouse.  During this time, Bob's uncle acquired several pieces of unused furniture, etc. from the courthouse.  Then, in the 1970s Bob did some land surveying work for his uncle.  Not wanting to take any money, Bob finally agreed to take this chair as payment for services.  It was not in very good condition as it needed to be re-caned, etc.  It definitely showed its years of use in the courthouse.  But Bob worked on it, and we started using it daily in our office. 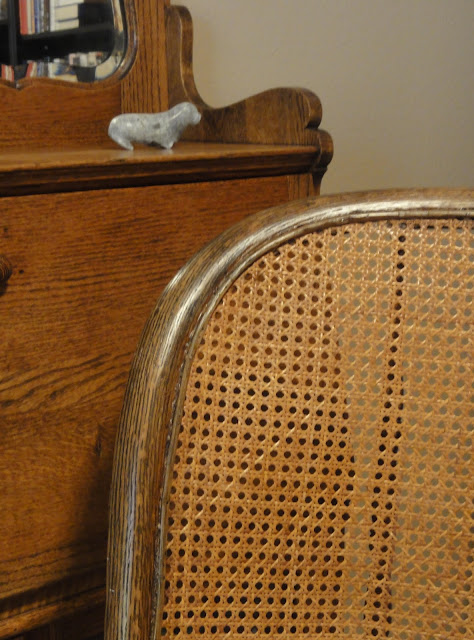 In the 1980s my grandmother died and I inherited a lot of things, including pictures.  I was going through them one day, and kept coming back to this picture.  I stared at it for the longest time, and finally realized this was The Judge sitting in OUR chair. 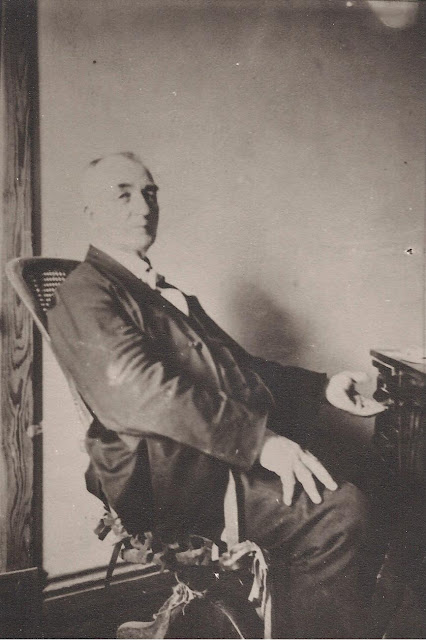 And that is the story about how a chair with my family history came through Bob's family to us.  And, of course, we have had it for 40 years in our home, so we are part of its history, too. Sometimes I think some of our stuff finds us rather than we find it.  For a couple more stories, check out my old posts about The Missing Towel Rack and The Traveling Milk Pail.

In addition to The Polohouse, I'm linking up to the following:
Common Ground for Be Inspired Friday
Miss Mustard Seed for Furniture Feature Friday
Knick of Time for Knick of Time Tuesday
My Uncommon Slice of Suburbia for Tuesday Treasures
Vintage on a Dime for Welcome Home Wednesday
Ivy and Elephants for What's It Wednesday
No Minimalist Here for Thursday Open House
Delightful Order for for Delightfully Inspiring Thursday
Posted by Salmagundi at 7:05 PM 13 comments:

I hadn't made Pineapple Upside-Down Gingerbread in a long time; but decided to yesterday for my Wednesday Morning Coffee Group. 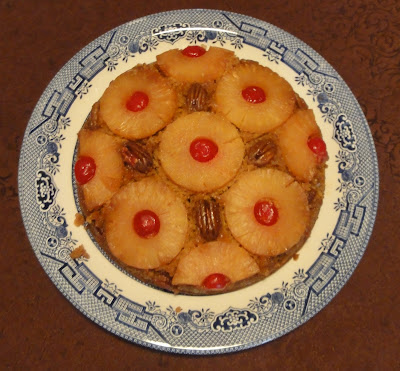 I've had this recipe (see below) for probably about 30 years - it originally came off of a box of Betty Crocker Gingerbread Mix. I still use the Betty Crocker mix, which makes this an easy but special dessert. 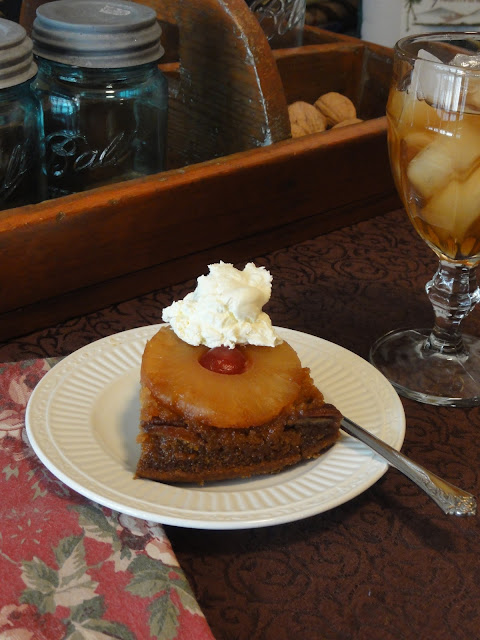 We've had snow in Colorado; and it is cold, but the sun is shining.  Just right for a left-over piece of this yumminess. 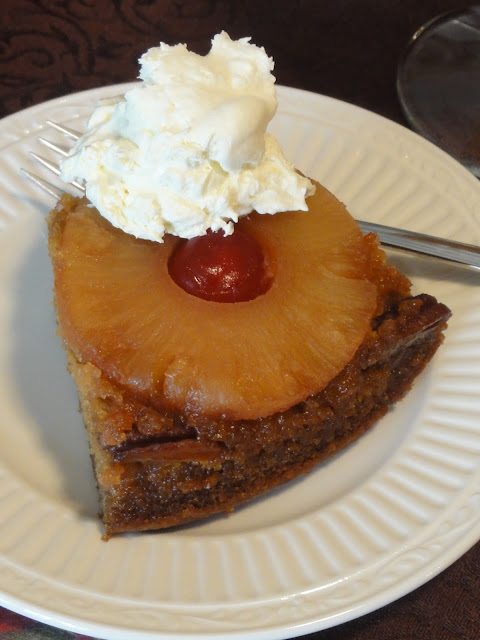 I'm linking to the following:
The Charm of Home for Home Sweet Home Friday
Common Ground for Be Inspired Friday
Rattlebridge Farm for Foodie Friday
Funky Junk Interiors for Saturday Nite Special
The Dedicated House for Make It Pretty Monday
A Stroll Thru Life for Table Top Tuesday
Primp for Primp Your Stuff Wednesday
Have a Daily Cup for Share Your Cup Thursday
Posted by Salmagundi at 1:34 PM 12 comments:

One of the things we bought for our grandson's 11th birthday this week was a cookbook since he shows a real interest in learning to cook.  I stood at Barnes and Noble for a long time - there are a lot of kid's cookbooks out there; but I finally chose Rachael Ray's 30-minute Meals for Kids because it was fun, doable, and half-way nutritious.  With the book, I promised him some kitchen time at my house.  Over the years with the grandkids, I have done quite a bit of baking and kitchen crafts, but not so much planning, shopping, and meal preparation.  So, Wyatt and I spent some time choosing a couple of recipes and making a grocery list. 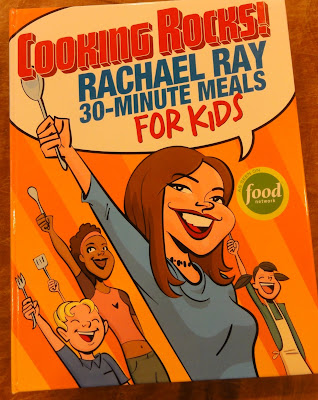 While he was at school, I did the shopping.  I intend to take him  in the future to show him the perils of grocery shopping.  But, not this time -- baby steps for both of us! 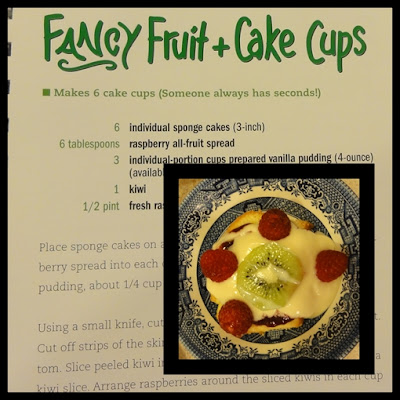 This was mostly just an 'assemble' recipe, but it was quite tasty. Even I learned something as Rachael demonstrated the easiest way to peel a kiwi. 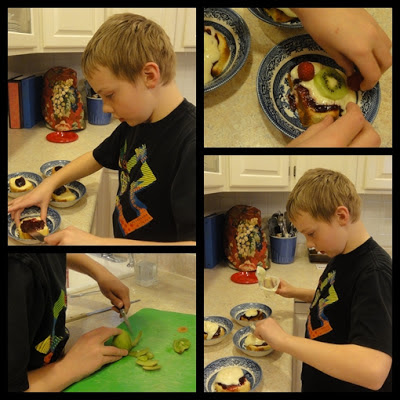 For our main course, Wyatt chose the Turkey Chili, Cheddar and Bacon Burgers.  Does lettuce, cheese, red peppers, scallions, and bacon on a burger count as a salad?  I said, "Sure, why not?" 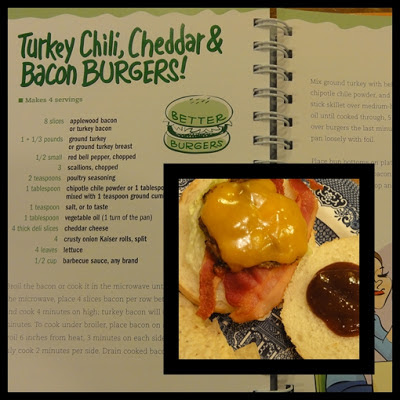 At the time, I wondered why he was having trouble cutting up the red peppers.  When I saw the pictures, I realized this 'lefty' was cutting them with his right hand! 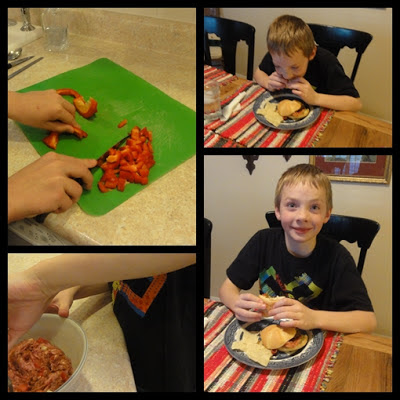 Cooking session #1 was a huge success.  He's already picking out recipes for next time.
So, how did you learn to cook?  Was it at your grandmother's house?

I'm joining the following parties:
Little Red House for Mosaic Monday
Between Naps on the Porch for Metamorphosis Monday
Cedar Hill Ranch for Cowgirl Up Tuesday
Cozy Little House for Tweak It Tuesday
Vintage on a Dime for Welcome Home Wednesday
Have a Daily Cup for Share Your Cup Thursday
No Minimalist Here for Thursday Open House
Rattlebridge Farm for Foodie Friday
My Romantic Home for Show and Tell Friday
Look What Mom Found for Kids in the Kitchen
Posted by Salmagundi at 3:19 PM 14 comments:

GRANDCHILDREN ARE THE REWARD FOR SURVIVING PARENTHOOD.  Here are our rewards - the best Valentines ever. 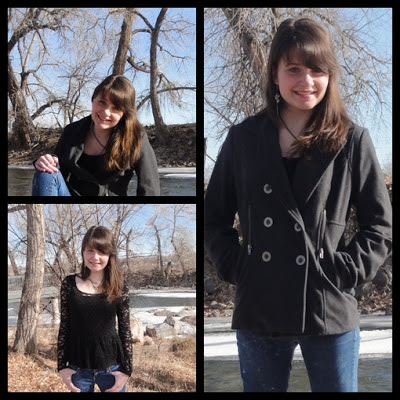 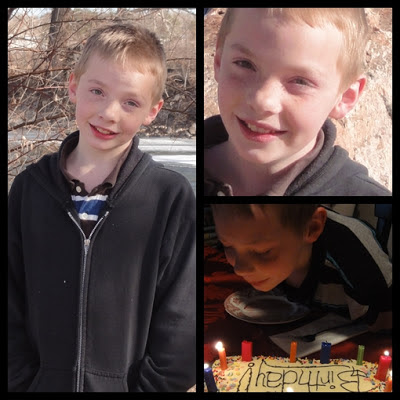 Our Valentine baby turns 11.  We had the family celebration this past weekend.  Needed to spread the treats out a little with a birthday party and a Valentine party at school, plus Wednesday night youth at church.  That's a lot of sugar going down!!

Caitlin and Wyatt, you will always be the sweetest treat ever.
Posted by Salmagundi at 4:08 PM 7 comments: 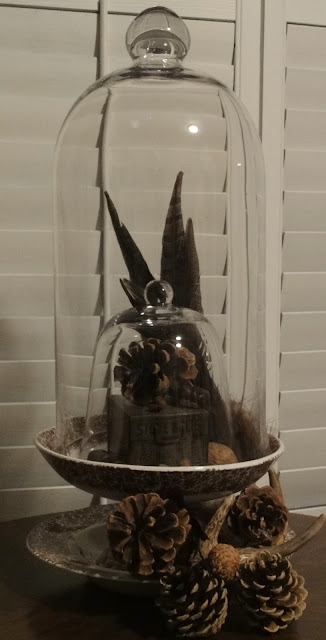 Does that make two better? 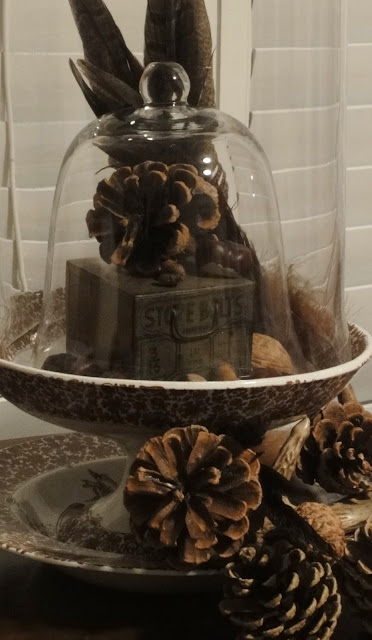 I'm joining Marty at A Stroll Thru Life for her winter cloche party.  Check out the party for a plethora of inspiration and thank Marty for hosting the get together.
Posted by Salmagundi at 1:31 PM 11 comments:

You have probably heard the furniture/accessory adage that 'buy what you love; and it will all go together when you get it home'.  Does this also apply to color and fabric?  I have spent years trying to figure out the relationships between colors with some success, but with a whole lot of failures, too.  It just doesn't seem to come natural to me - it takes a lot of practice.
Strange, I know, but two of my favorite colors are brown and black.  Do they go together?  I decided to do a pillow experiment using scraps of wool that I had on hand.  I gradated brown and black, light and dark to see if they blended together. 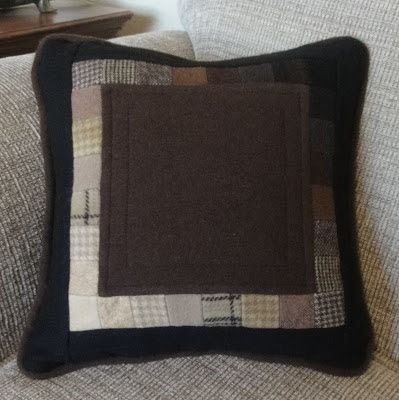 For years, I used this technique when making quilts from scraps.  Below is one of my old work sheets from a quilt I made. I would pick out a couple of fabrics (shown upper left in photo below) to use repeatedly to unify the quilt; then I chose fabrics from my stash to add.  I would lay them out in gradation; then squint my eyes or photograph them to see if there was something that stood out in a bad way.  I'm sure in this particular quilt I eliminated bright yellows, and used the brighter red as an accent.

This is the quilt that resulted from that exercise.  It ended up having 96 different fabrics in it. 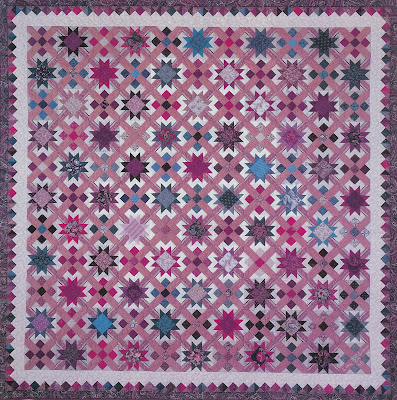 Even after many, many of these worksheets/quilts, I still struggle. 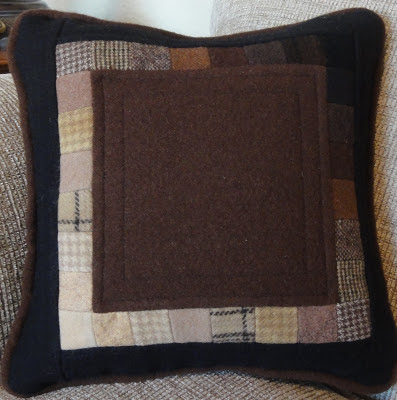 So now do I think black and brown go together?  Yes, but maybe it's because I just love the two colors.  (By the way, I'm terrible at picking out paint colors - I need more practice!)

Check out the following blogs for lots of inspiration:
No Minimalist Here for Thursday Open House
The Shabby Creek Cottage for Transformation Thursday
The Charm of Home for Home Sweet Home Friday
Romantic Home for Show and Tell Friday
Funky Junk Interiors for Saturday Nite Special
The Dedicated House for Make It Pretty Monday
Cozy Little House for Tweak It Tuesday
Primp for Primp Your Stuff Wednesday
Ivy and Elephants for What's It Wednesday
Posted by Salmagundi at 10:50 AM 7 comments: