No, I'm not talking about those little confections with which our grandmothers treated us.
I'm talking about 'cookies' on brown transferware.  That is what they call the cartouches, little pictures encircled with borders, on transferware from the 19th century.

Recently, while antiquing in the northern part of Colorado, I spied a covered vegetable bowl.  I recognized right away from its 'calico' border that it was the Cairo pattern from Copeland Pottery dating from the early 1880s. 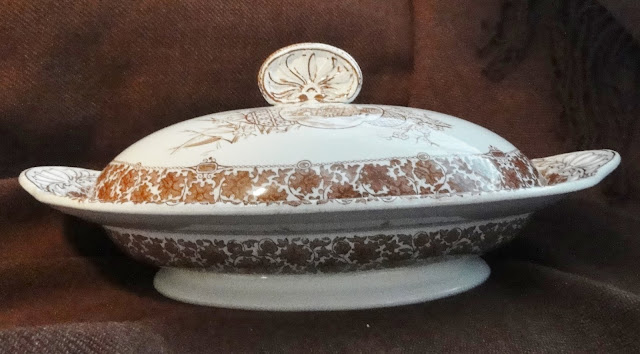 I also knew that this pattern usually has amazing 'cookies' in the design -- and I wasn't disappointed. 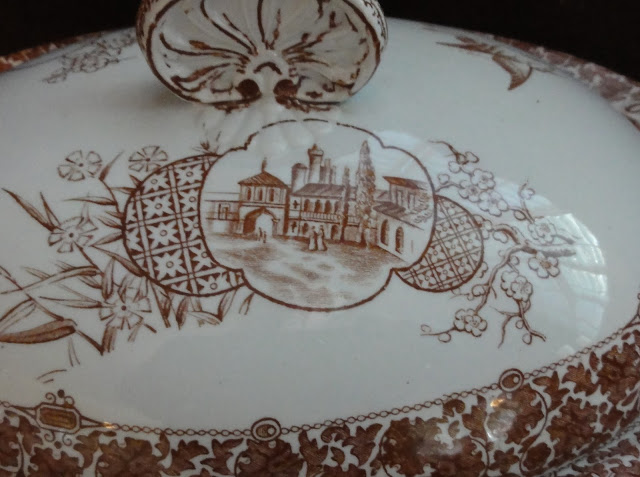 And, then I removed the lid and this cartouche was on the inside of the bowl --- I would gladly eat all of the vegetables served in this bowl for a look at this artwork. 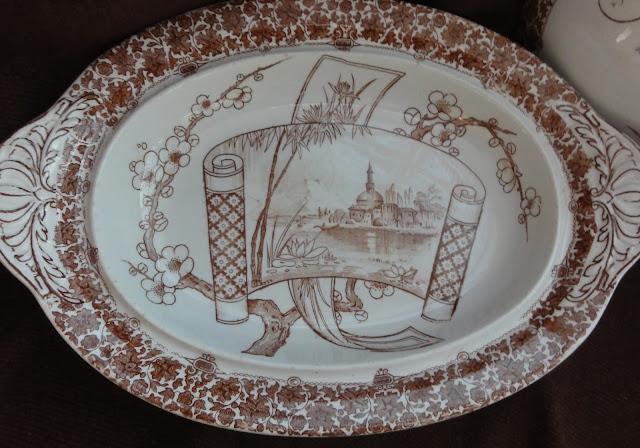 The pieces I have seen in this pattern usually have an incised mark on the back. 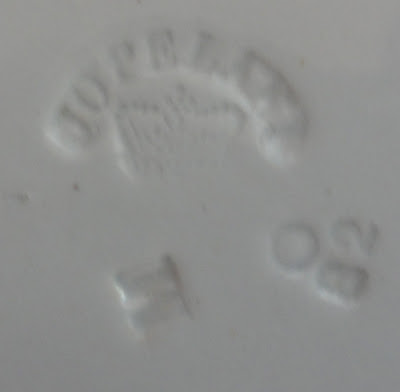 Several years ago, my friend, Jan, gave me this pedestal bowl in this pattern. 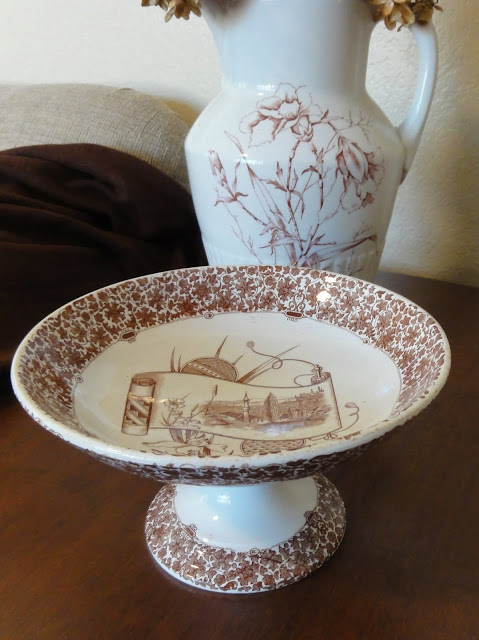 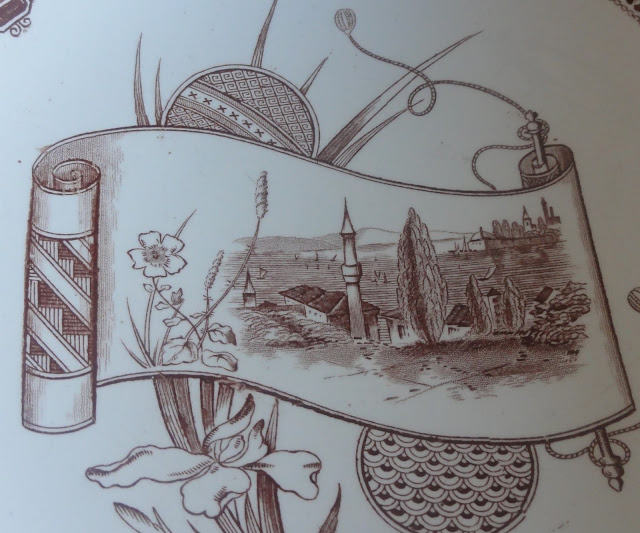 I also have a soup bowl with this camel 'cookie'.  Every piece I have seen in this pattern has a different cartouche. 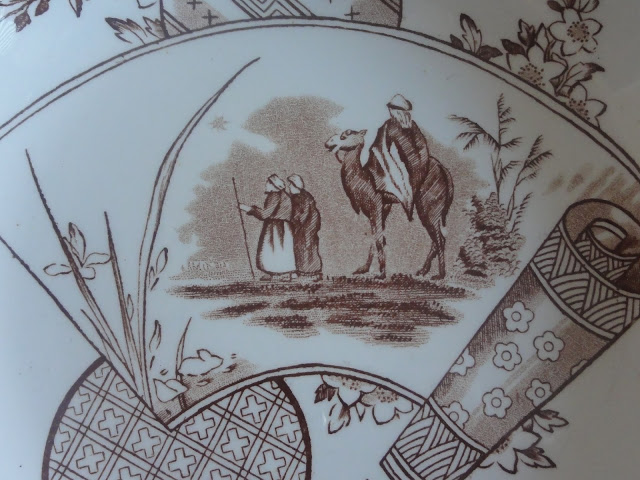 I'm fortunate to have just these three pieces in my brown transferware collection, as they can be a bit pricey.  I have  passed by some other pieces at high prices, but I'll keep hunting for more yummy 'cookies' to devour at a reasonable price.

I'm joining the following:
The Charm of Home for Home Sweet Home Friday
French Country Cottage for Feathered Nest Friday
Confessions of a Plate Addict for The Scoop Tuesday
A Stroll Thru Life for Inspire Me Tuesday
Have a Daily Cup for Share Your Cup Thursday
Posted by Salmagundi at 11:19 AM 7 comments:

A TOUCH OF AUTUMN

I don't do a lot of Fall decorating, but try to change out the front porch to welcome in the season. 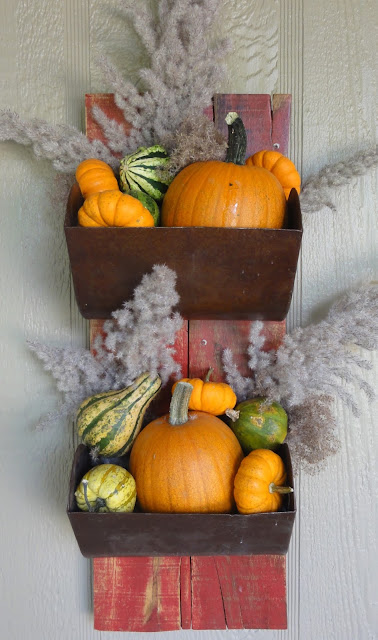 One of my favorite places to shop is a farm surplus yard.  These elevator grain bins came from my favorite yard in Rocky Ford, CO.  Bob mounted them on pallet wood, so I could fill them with the season's bounty! 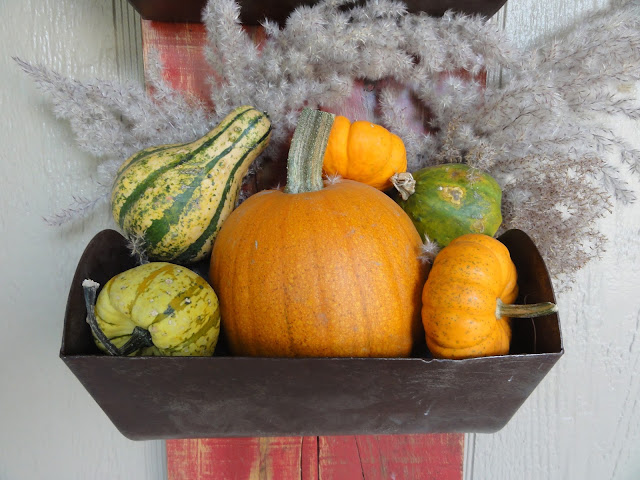 And indoors, a patchwork pumpkin for a touch of autumn. 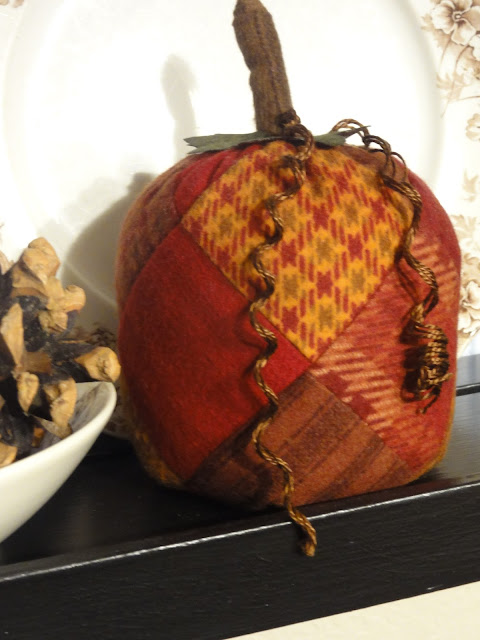 I'm joining Jann Olson at Have a Daily Cup for Share Your Cup Thursday.  Be sure to check out her blog (here)  -- she REALLY knows how to decorate for Fall.

Clarice Cliff (1899-1972) was an English ceramic artist active from 1922 to 1963.  She is most famous for her art deco, hand-painted pottery from the early part of the 20th century.  These pieces are very collectible and expensive. As a collector of brown transferware, I have often run across transferware pieces with her stamped signature and the Royal Staffordshire Pottery or the Newport Pottery Co. logos on the back.  These pieces date to the mid-20th century.

I've never been able to find any info about how this change transpired after World War II from avantgarde hand-painted and designed pottery to traditional transferware.

I have purchased several pieces of her transferware over the years; and they have been very inexpensive.
I recently found this serving bowl in the Ophelia pattern for $5.00. 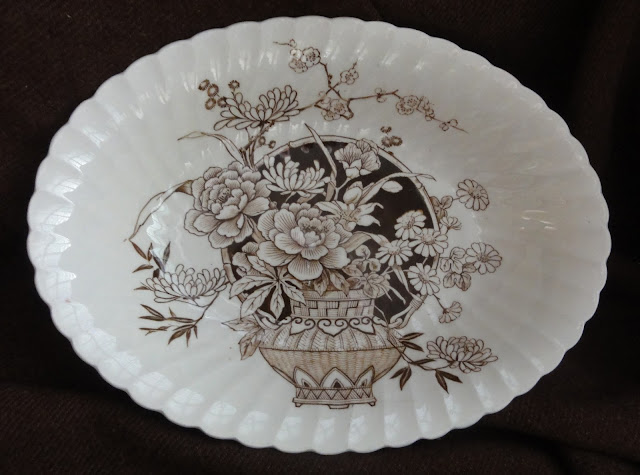 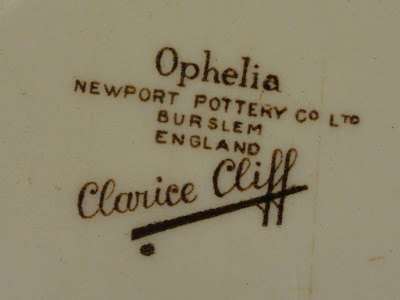 I have two of these bone dishes in the Tonquin pattern with the Royal Staffordshire back stamp.  I also have some plates in this pattern, but they do not have her signature on them. 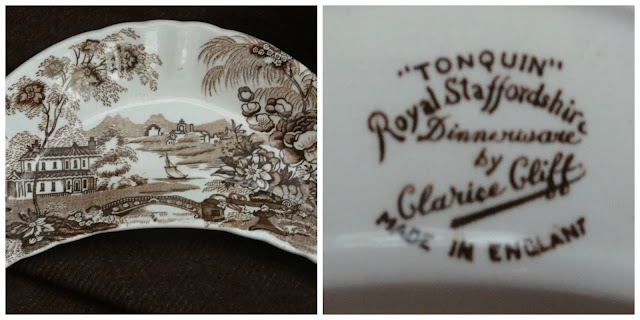 This cup and saucer also has the Royal Staffordshire Ceramics back stamp.  The pattern is Davenport. 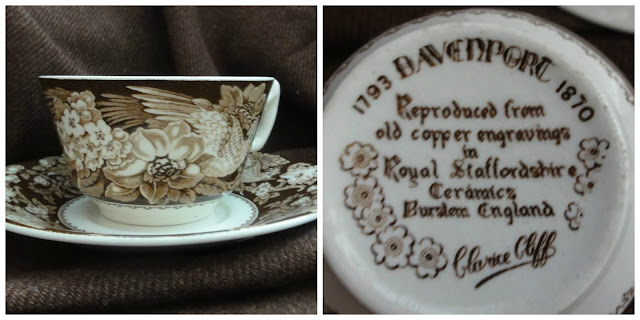 I have some other pieces attributed to her in several patterns with various stamps.

Even though my favorite brown transferware will always be from the 19th century, I'm not a transferware snob --- I love it all! 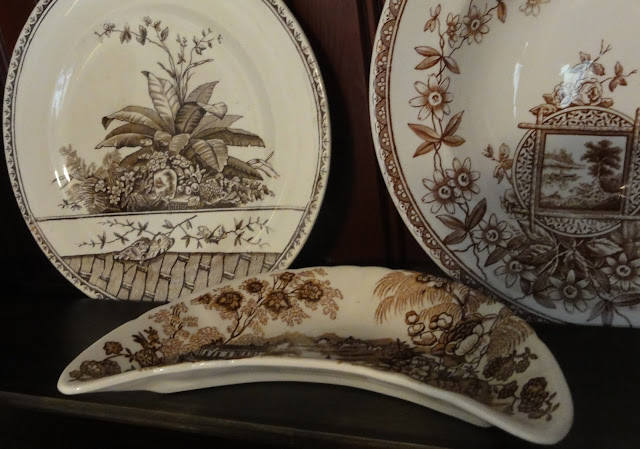 It all blends together.

I'm joining the following:
Coastal Charm for Show and Share Tuesday
A Stroll Thru Life for Inspire Me Tuesday
Have a Daily Cup for Share Your Cup Thursday
The Charm of Home for Home Sweet Home Friday
Posted by Salmagundi at 3:07 PM 7 comments:

Our granddaughter has an October birthday, and has adopted Halloween as her own personal holiday!  She has always loved it, and looks forward to it all year long.
When she was little she always had lots of ideas of what I could make her as a costume.  As her doting grandmother what was I to do, but get out the sewing machine and comply?
First, before she even knew what was going on, I chose to make her a little lamb costume.  By the next year she was vocal and wanted to be a fairy with a wand.  She was so tiny and couldn't keep her tutu from falling down.  Next, she was the cutest witch riding a broom.  And, then she began her obsession with shoes -- oh, how she loved Dorothy's sparkly red shoes. 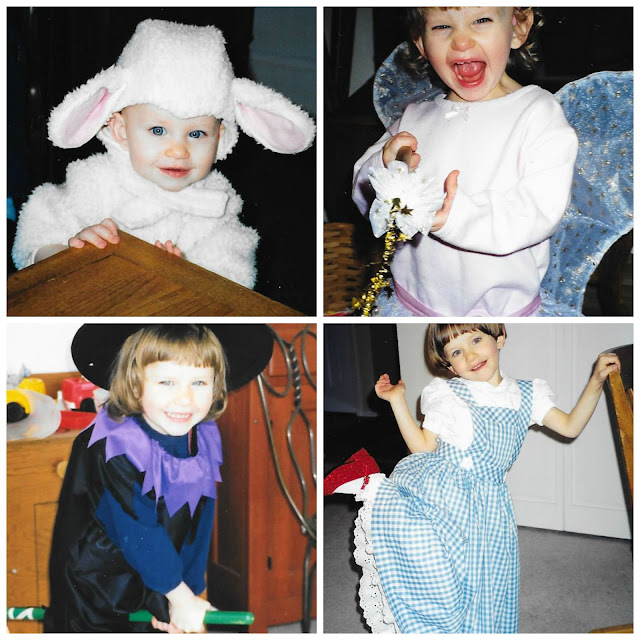 Then, there was the year of the Indian -- she said it had to have leggings, etc. with lots of rick-rack, fringe, and beads.  And then the Harry Potter year about did my sewing machine in -- a lined black velvet, hooded coat.  And Wyatt wanted a pirate costume made out of the lining fabric of Caitlin's coat (satin, ugh).  What opinionated little Halloweeners they were! Finally, I had an easy year as I only had to make a poodle skirt. 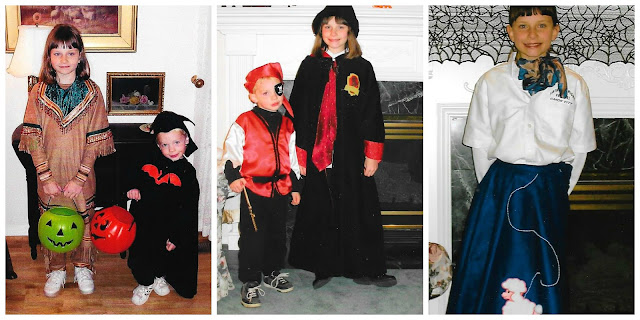 There were other years, but these are the photos I found.
But, I think my all-time favorite was the princess bride!! 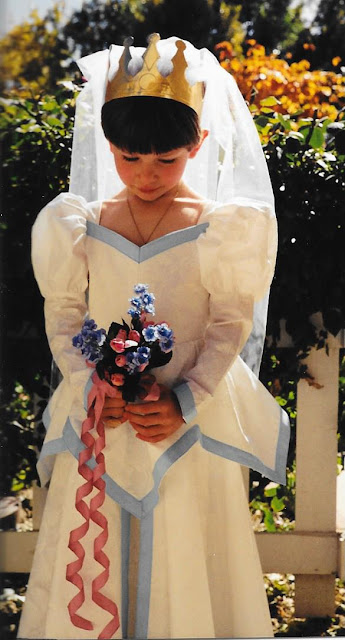 She is now 20 years old with a Pinterest board on real Bridal Gowns!
That time will come -----

For her birthday and Halloween this year, I made her a table runner. 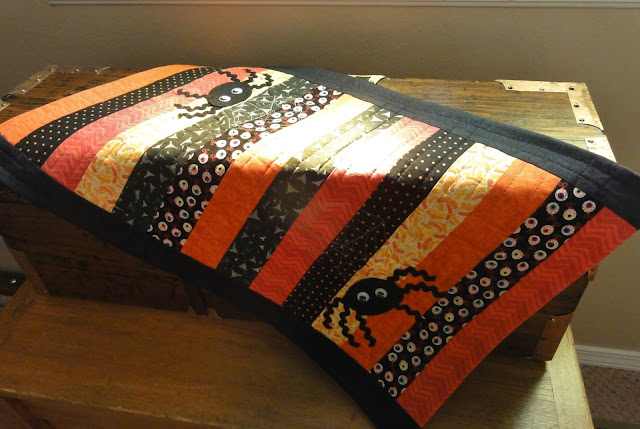 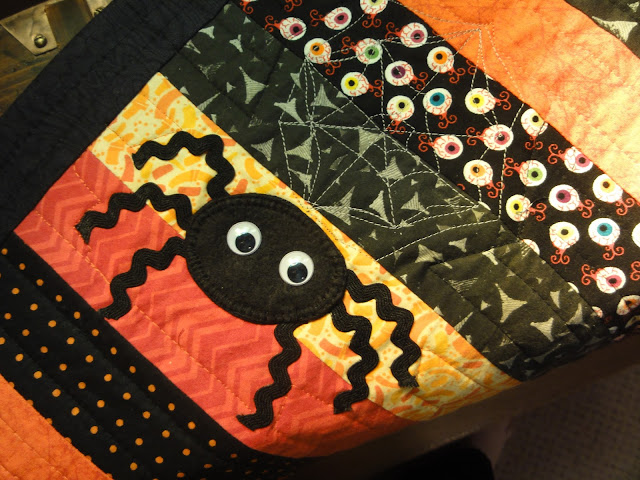 Some how, it just isn't the same as an adorable little kid in a costume. 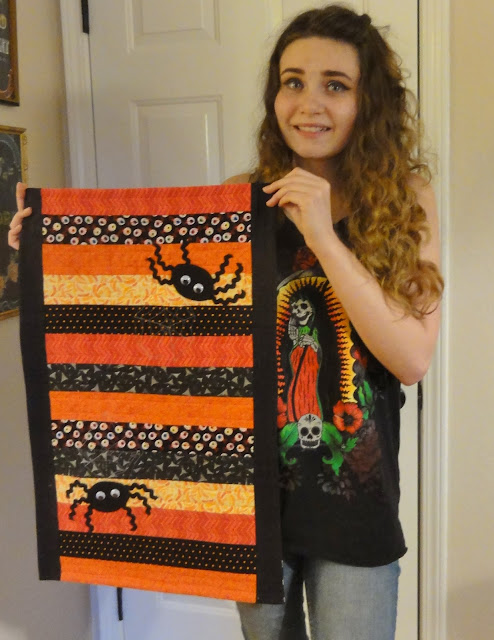 I'm joining the following:
Backyard Neighbor for Blue Monday
Have a Daily Cup for Share Your Cup Thursday