I've been on a mission to update the linens in the guest room this Spring.  Previous posts about the pillow cases and the curtains may be viewed here and here.

Remember this Waverly fabric from the 1990s - it was everywhere (and is still available at my local JoAnn's!).  I bought yards of it in 1997, and made the master bedroom drapes out of it.  I soon tired of those, so I repurposed them into the guest room dust ruffle.  Now, ten years later, it is past time for a change. 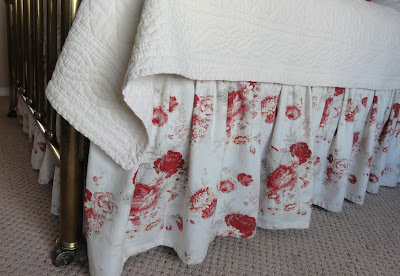 This time I went neutral, so in the future I can change out the other bed linens easier.  I love to sew; but, for some reason, I don't like to make dust ruffles!!  I now have neutral bed skirts everywhere, so hopefully I don't have to make any more. 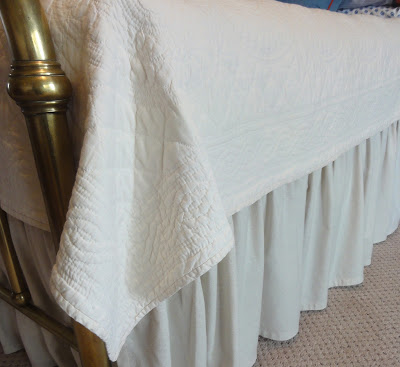 I just finished this big, blue denim pillow with the red piping and flange edge. 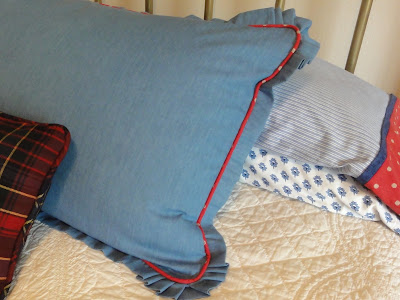 Now, on to the mini-tour --
This room is pretty large but full of family furniture and several collections we have amassed over the years. 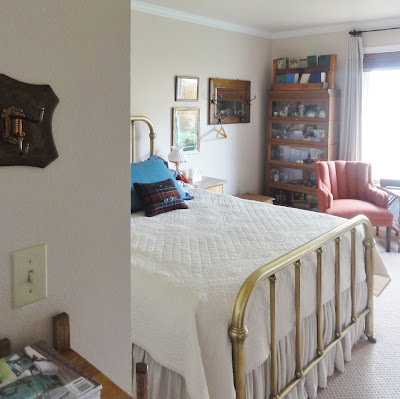 The barrister bookcase in the corner is full of everything from Easter, Valentine, and patriotic items to antique sewing things to macaron boxes from Laduree in Paris. 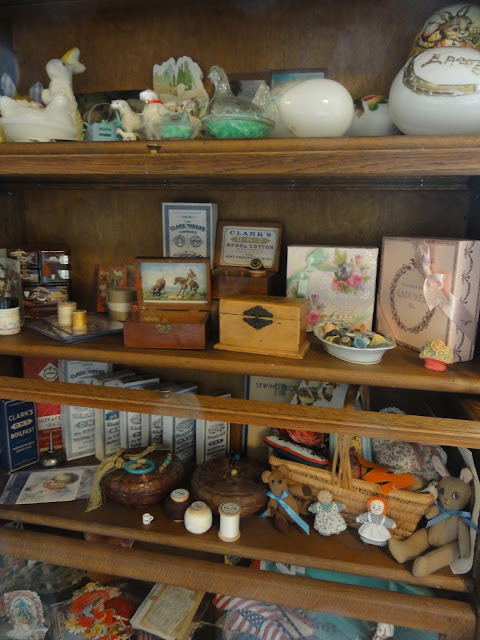 The walls contain part of our collection of early 1900's sheep prints (so hard to photograph because of the glare - sorry!). 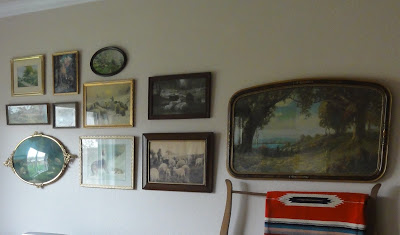 Guests always comment about how fun it is to stay in this room with so much to check out.  Secretly, they are probably thinking, "How can they live with all of that stuff."
I've always said that I don't decorate, I accumulate!

I'm joining the following:
Vintage on a Dime for Welcome Home Wednesday
Ivy and Elephants for What's it Wednesday
The Shabby Creek Cottage for Transformation Thursday
From My Front Porch to Yours for Treasure Hunt Thursday
Common Ground for Vintage Inspiration Friday
The Dedicated House for Anything Blue Friday
A Stroll Thru Life for Inspire Me Tuesday
Knick of Time for Knick of Time Tuesday
Posted by Salmagundi at 4:32 PM 11 comments:

I know I'm late to the drop cloth party, but decided it was time to try them out as a fabric choice.  I read extensively on the web about using them before I started.  I ended up purchasing two of these drop cloths from Sherwin-Williams. 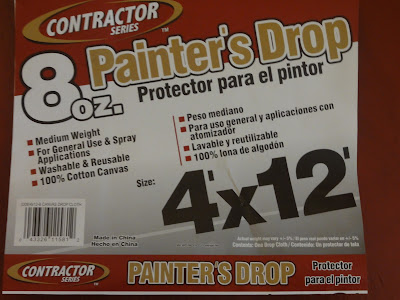 After the research, I was prepared for all of the ironing necessary; but that turned into nothing more than a little steam pressing.  What I didn't expect was after five trips through the washer and dryer, the hems were frayed in spots. 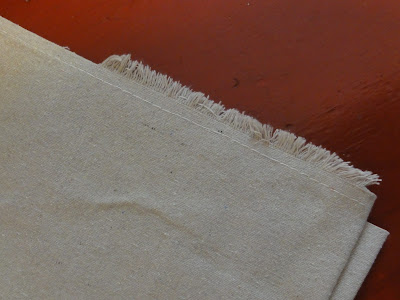 So, it was necessary to go ahead and sew normal hems -- one inch on the sides and three inches on the bottom rather than just using the narrow hems that were there. 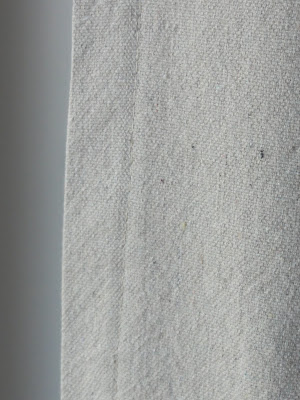 In the end I think this worked to my advantage; because with the heftier hems, the curtains hang really well. 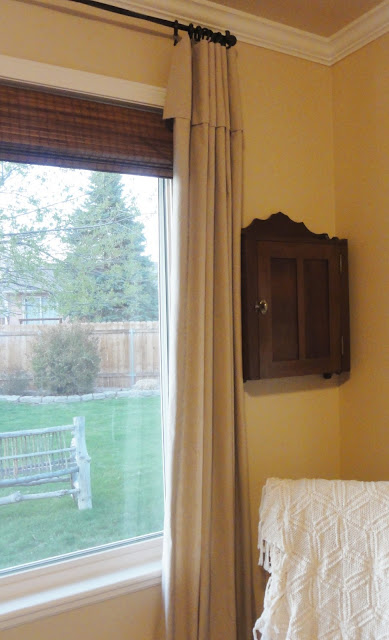 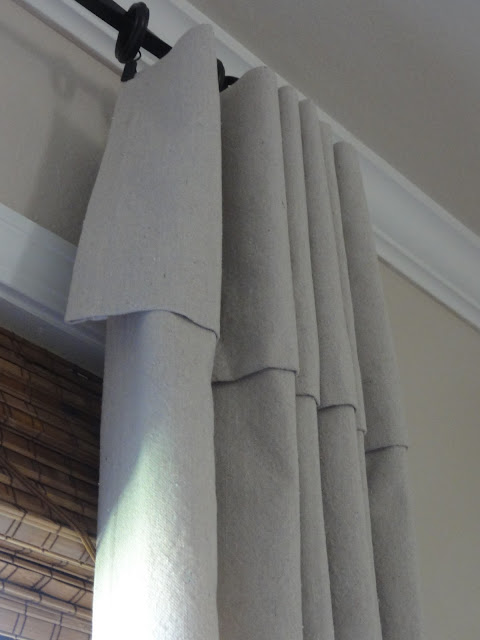 I'm really pleased with the weight, color, and texture of the drop cloths. And, of course, the price can't be beat. 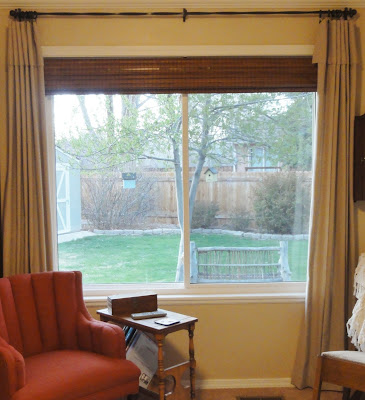 I knew these panels needed to be simple, as there is a lot going on in this guest room.   The mini-makeover of the room is continuing!
IT'S TUESDAY, IT MUST BE SNOWING.  Yes, for the 5th Tuesday in a row, it is snowing in Colorado.

I'm joining the following:
Primp for Primp Your Stuff Wednesday
No Minimalist Here for Thursday Open House
The Charm of Home for Home Sweet Home Friday
Between Naps on the Porch for Metamorphosis Monday
Coastal Charm for Nifty Thrifty Tuesday
Posted by Salmagundi at 9:00 AM 11 comments:

Burrito-roll refers to the technique -- not what is inside my pillowcase!!!   I first learned this method for making pillowcases at the Houston Quilt Festival in the 1990s.  I've made scads of them since then for gifts and for personal use.  They can be made in less than an hour, and it's fun to choose the three coordinating fabrics.  They are especially a great gift for a sick child, or one with sleeping issues, or just because; as the variety of cotton fabrics available for kids goes from dinosaurs to princesses and everything in between. 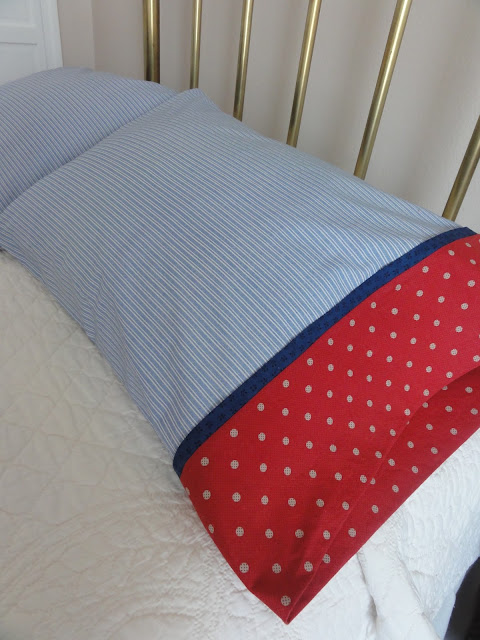 There are tutorials all over the web for this technique.  A good one can be found at The Crafty Gemini (click here).  The great thing about this method is that all seams are enclosed with no raw edges by just sewing three seams! 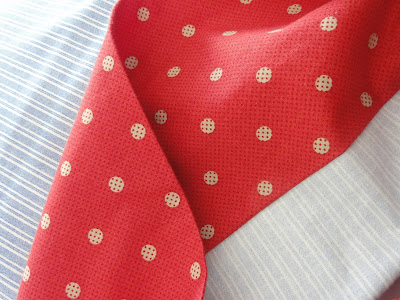 I'm in the process of a mini-makeover of our guest room that includes these new pillowcases.

By the way, this was the view of our backyard from the guest room this morning -- Colorado at its best -- the morning after a snowstorm with the blue sky and the sun shining!  Love it. 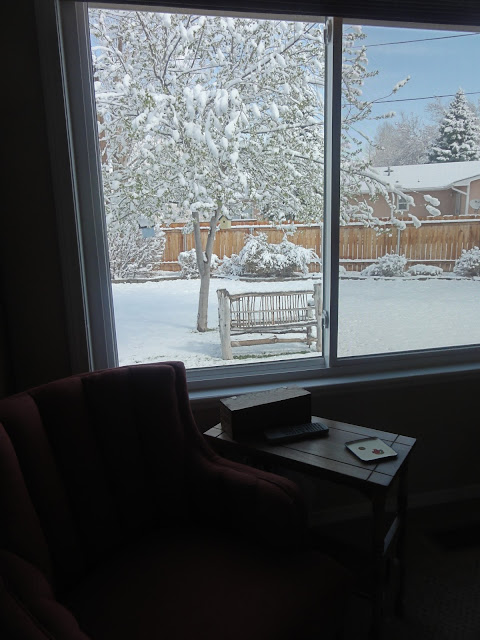 I'm linking to the following:
The Charm of Home for Home Sweet Home Friday
Romantic Home for Show & Tell Friday
The Dedicated House for Anything Blue Friday
Funky Junk Interiors for Saturday Nite Special
Smiling Sally for Blue Monday
The Dedicated House for Make It Pretty Monday
Cedar Hill Ranch for The Scoop Tuesday
A Stroll Thru Life for Inspire Me Tuesday
Ivy and Elephants for What's It Wednesday
No Minimalist Here for Thursday Open House
A Daily Cup for Share Your Cup Thursday
Posted by Salmagundi at 11:56 AM 12 comments:

IT'S IN THE CARDS

I often wonder how things have survived through many moves and purging of households.  For instance, why do I still have two sets of Old Maid cards from my childhood in the 1940s?  But, here they are -- still stored among all of our stuff!! 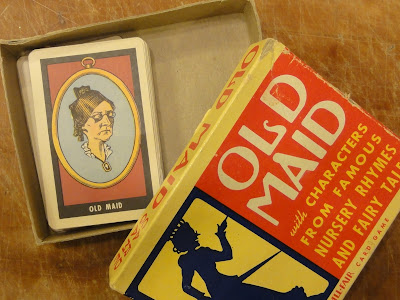 Back then, there were no video games, iPods, etc. and there wasn't even TV.  We spent a lot of rainy/snowy days playing board games and cards. 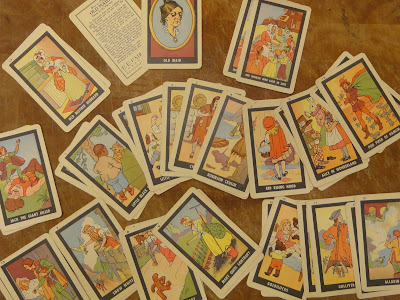 This particular set was based on matching sets depicting popular nursery rhymes and fairy tales. 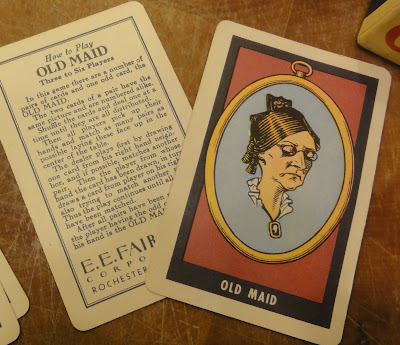 After taking turns matching sets, the one left holding the single card was declared THE OLD MAID.  As girls, did we grow up thinking it wasn't a good thing to be left an old maid with a frown on our face --
or would it be better to be an old woman who lived in a shoe with lots of kids, but a smile on our face? 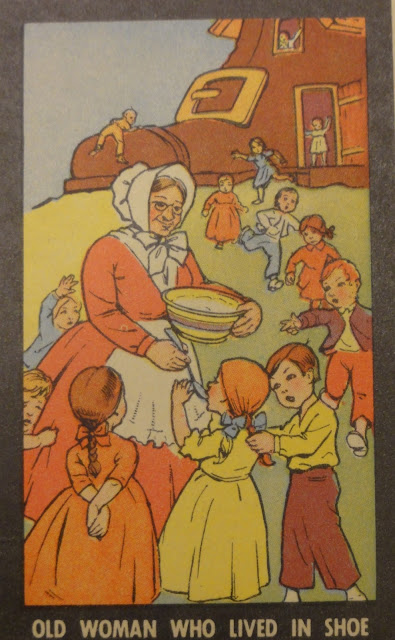 My second set of Old Maid cards is missing its box, but all of the cards are there.  The subject matter of this set is much different, but also really lacking in today's political correctness. 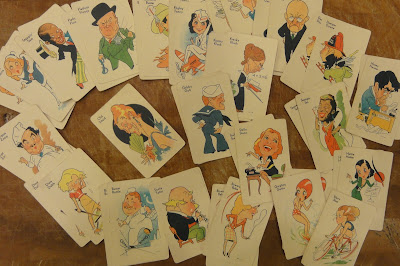 This flirtatious old maid has a gleam in her eye and a smirk on her face! 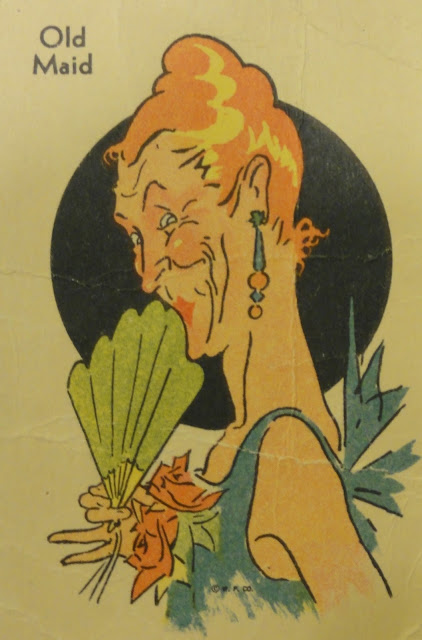 And, we have Gloomy Gus and the Kranky Kluck. 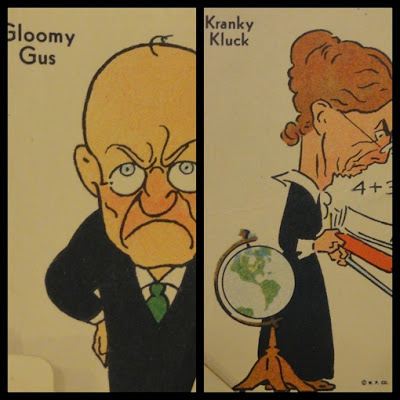 Then, we have the Nosey Newser and the Tooty Tutor. 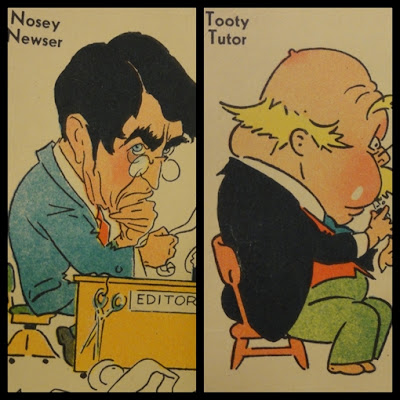 Thank goodness, most of us didn't pay much attention to any lesson subliminally offered!!!
I'm sure the reason these cards have survived purging at our house over the years is the appeal of the 1940 graphics.

I'm joining the following:
Common Ground for Be Inspired Friday
Knick of Time for Knick of Time Tuesday
Ivy and Elephants for What's It Wednesday
Have a Cup for Share Your Cup Thursday
Posted by Salmagundi at 9:34 AM 8 comments:

Since winter isn't really over in Colorado until Mother's Day, I figured I had time to sneak in another wool pillow.
This is an old cotton patchwork pattern and technique that simulates woven ribbons.  I thought it was worth a try to adapt with wool and plaids. 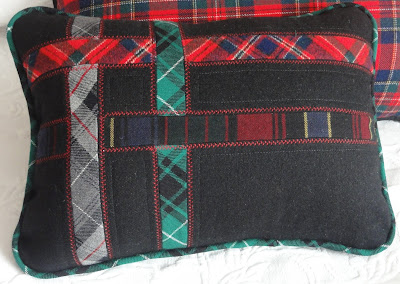 I added some machine embroidery and quilting to accent the pattern. 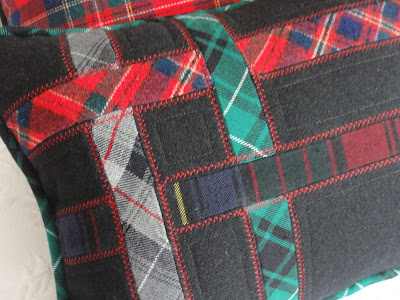 On our recent junking trip to Denver, I found a Pendleton gray plaid skirt for $3 at a Goodwill to include in this pillow with scraps from other Pendleton and Ralph Lauren thrifted skirts.

I also found a great blue and red Pendelton pleated plaid skirt for $2 at a Disabled Veteran's thrift store.  It has about 4 yards of wool fabric in it that I'm saving for a future large project. 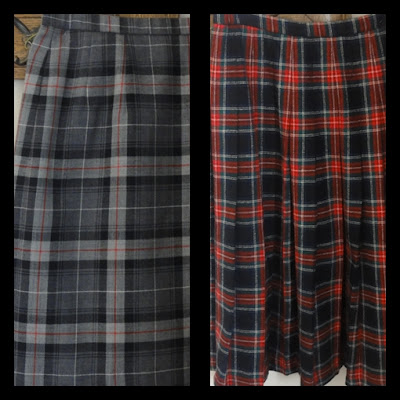 I've been looking for awhile for a larger wool throw -- we really use these all winter long, and I wanted one big enough to cover from my chin to my toes.  Found this Pendleton one at an antique mall in Littleton. 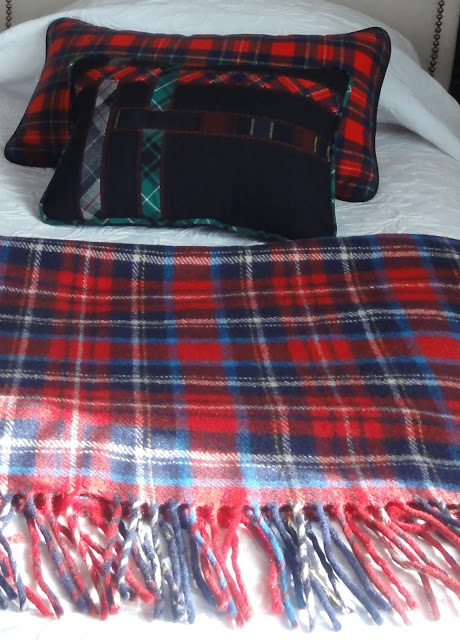 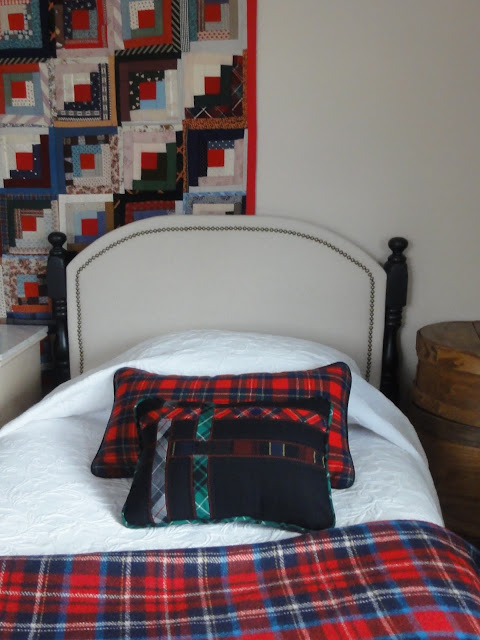 I'm linking up with the following:
Vintage On a Dime for Welcome Home Wednesday
A Daily Cup for Share Your Cup Thursday
Common Ground for Be Inspired Friday
Funky Junk Interiors for Saturday Nite Special
Between Naps on the Porch for Metamorphosis Monday
Cozy Little House for Tweak It Tuesday