For your Fall viewing pleasure ----- 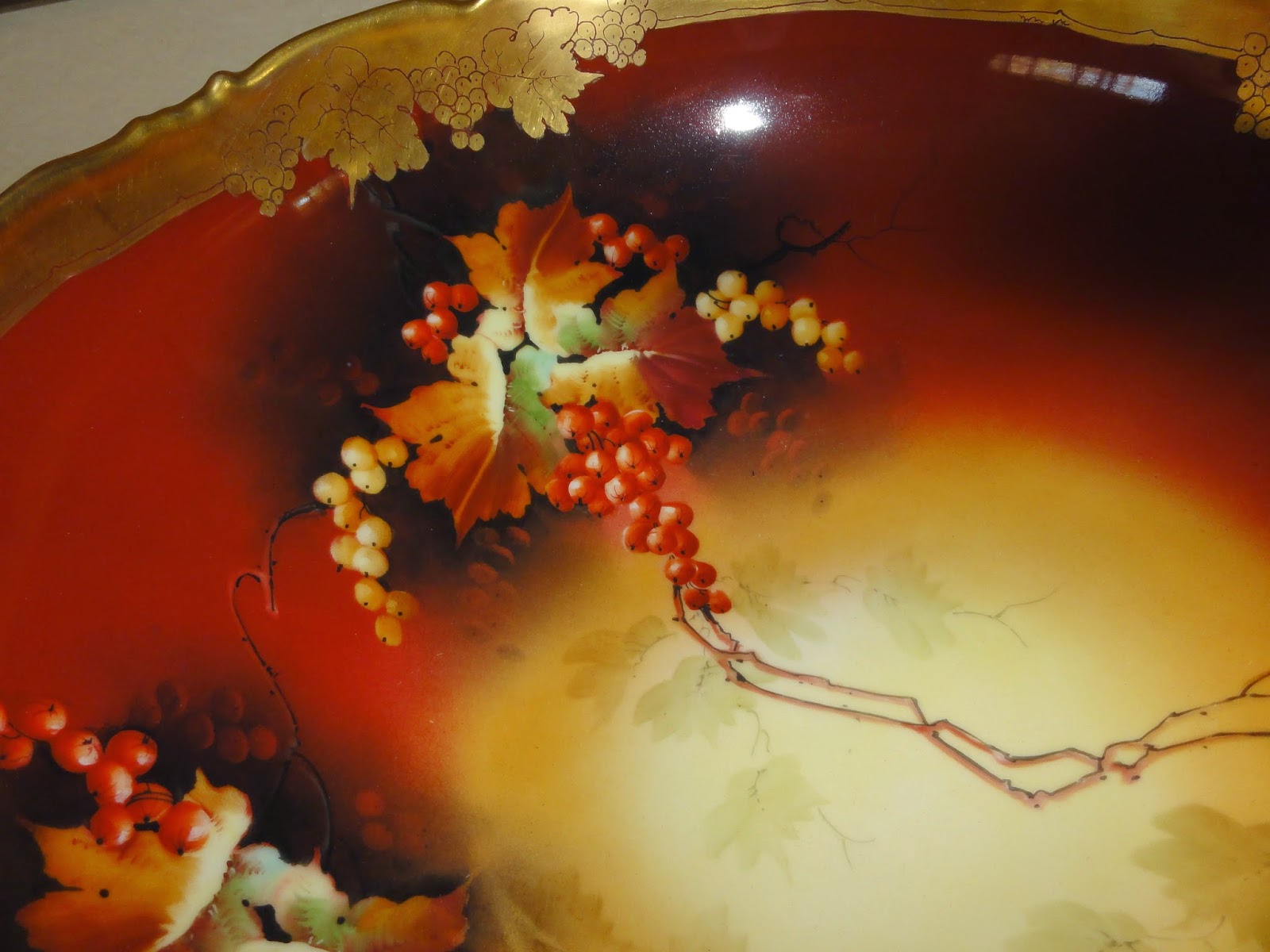 All of the wonderful colors of harvest time --- 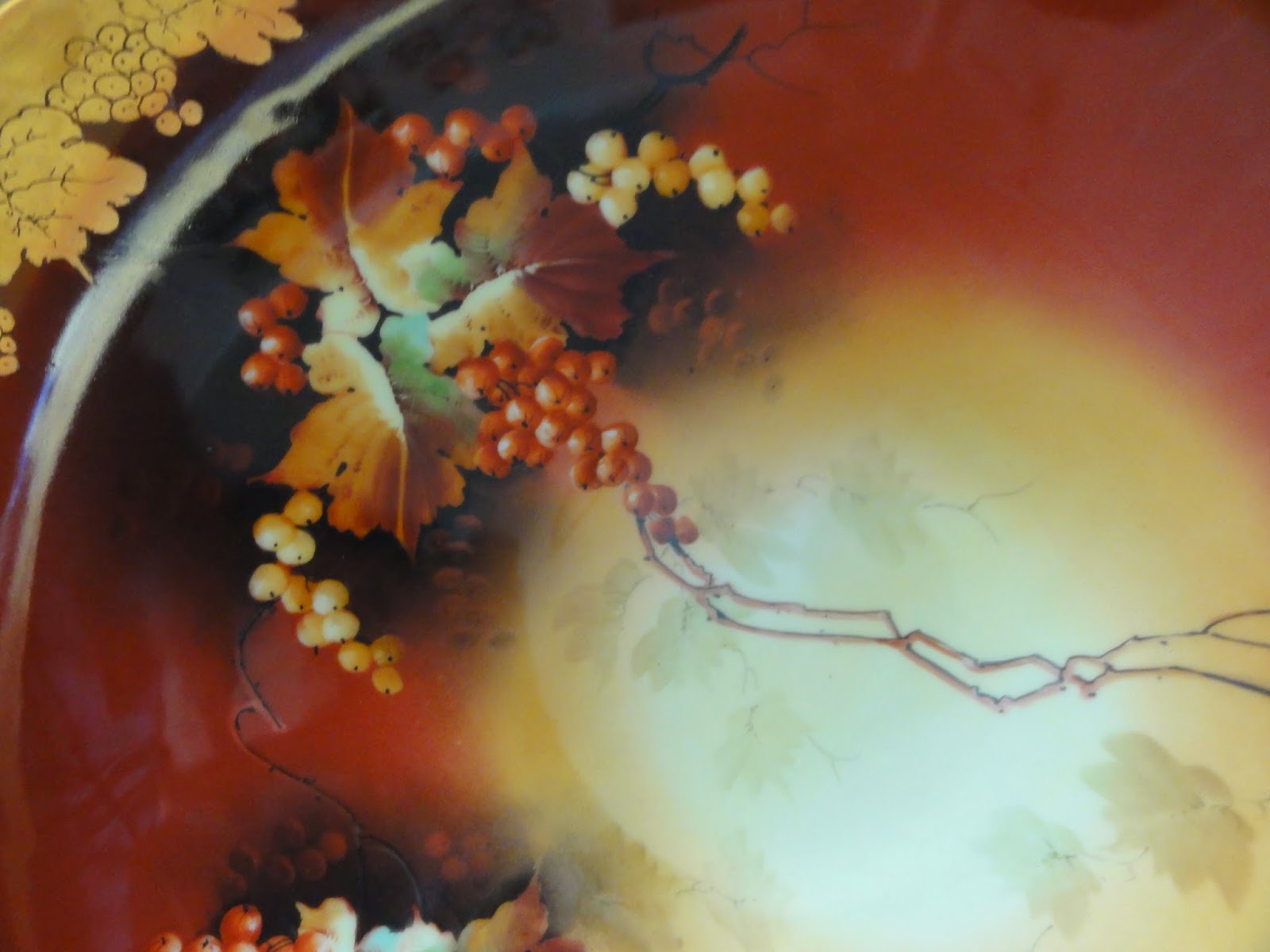 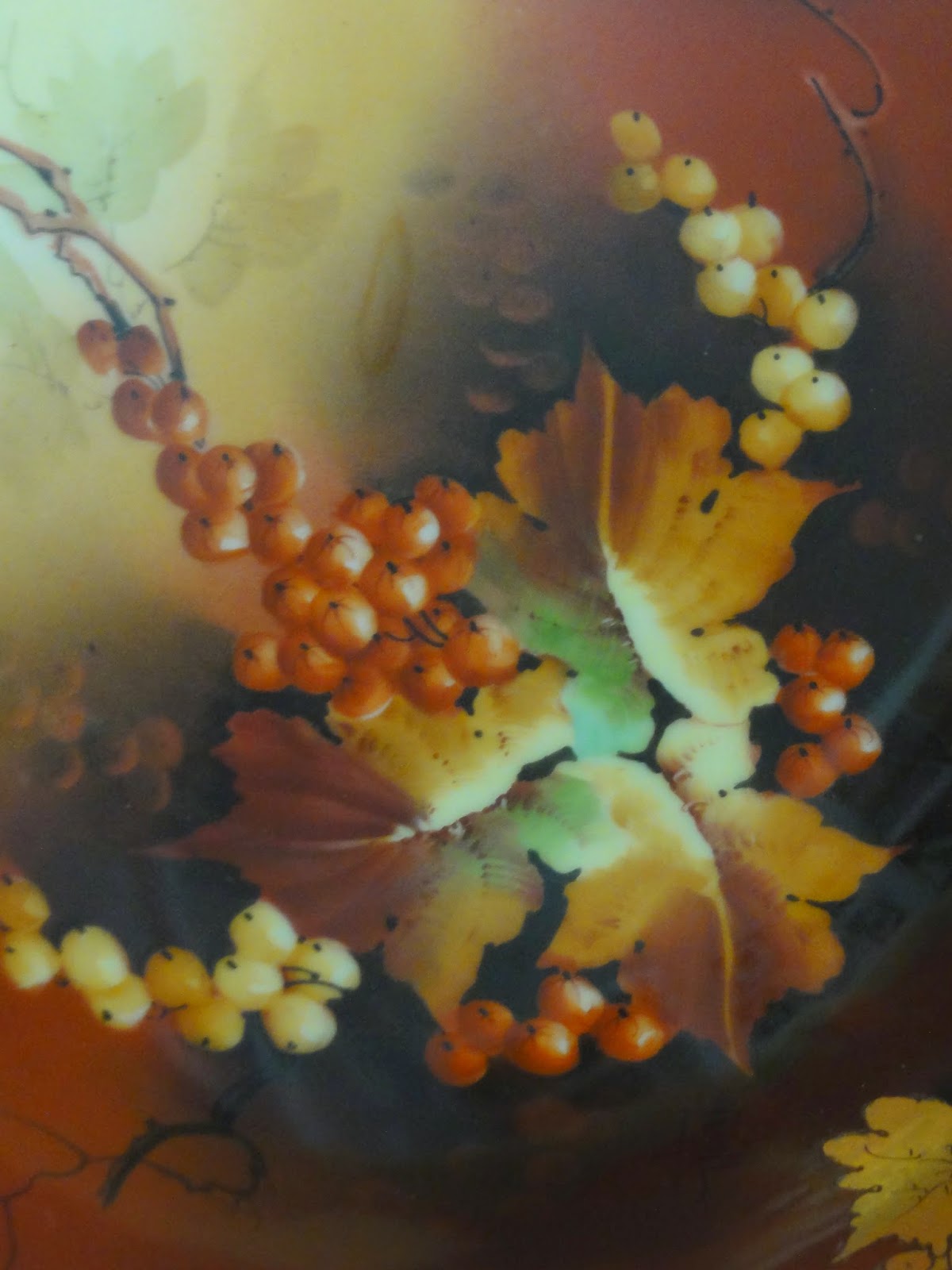 Wrapped up in one glorious punch bowl ---- 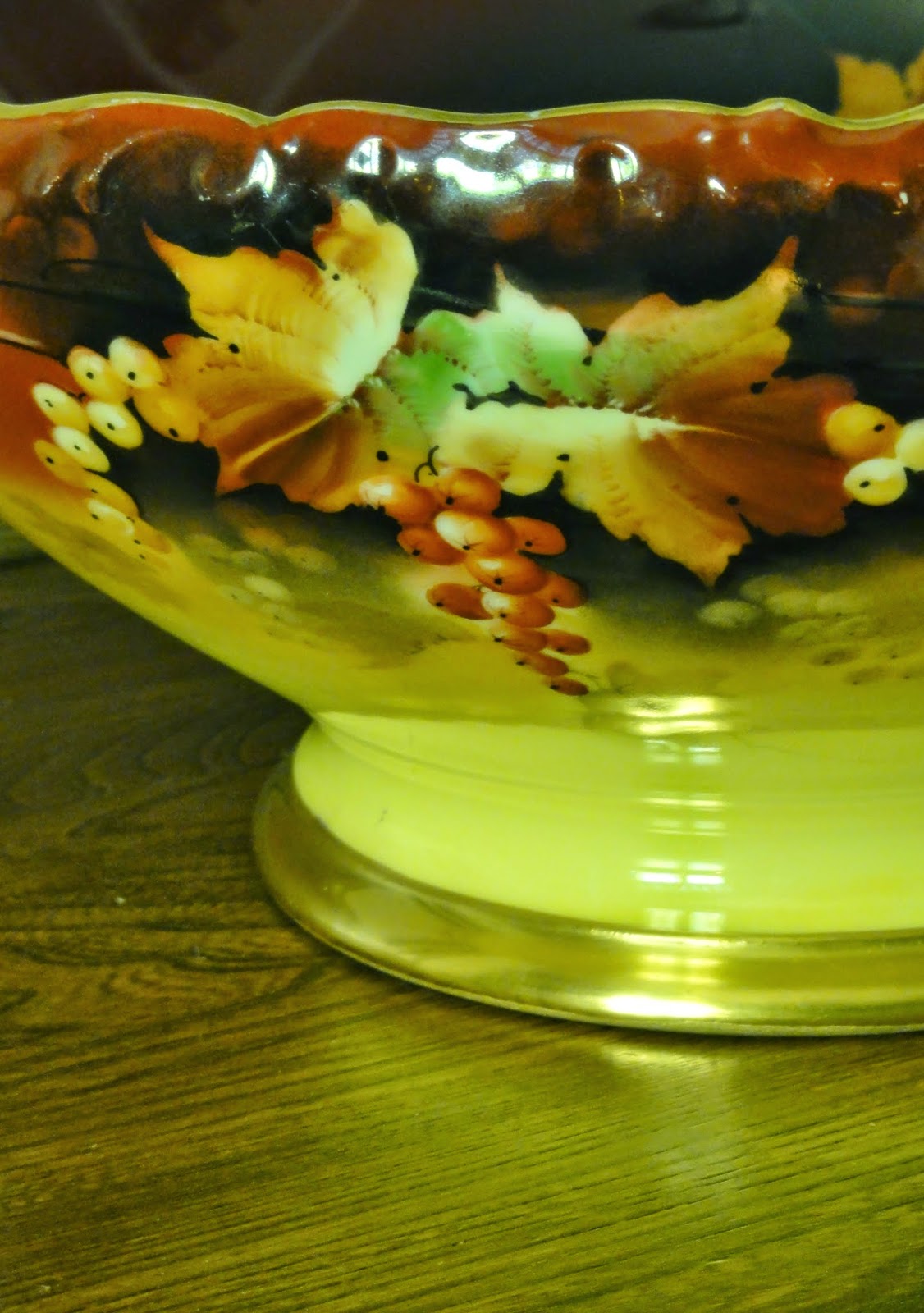 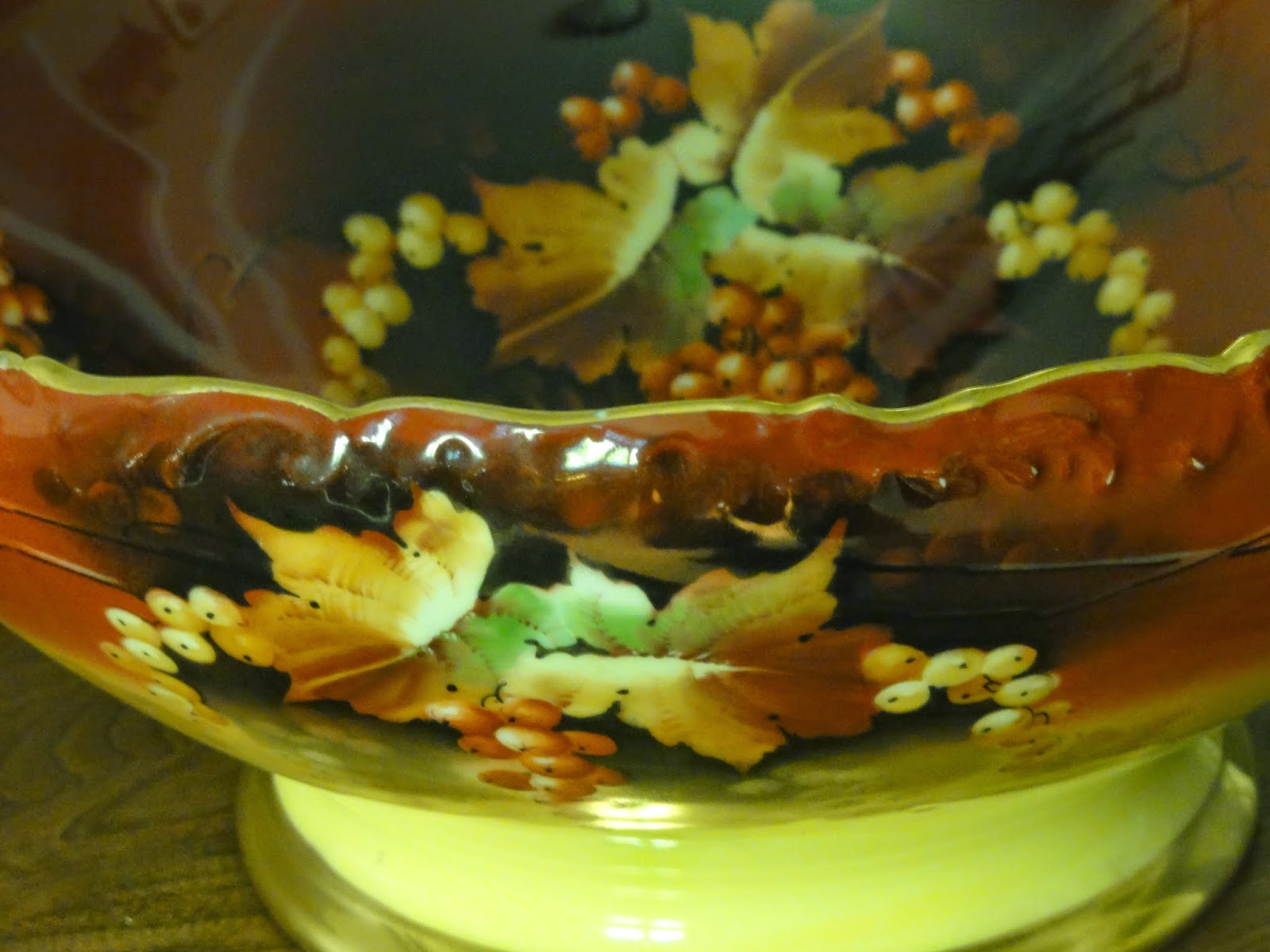 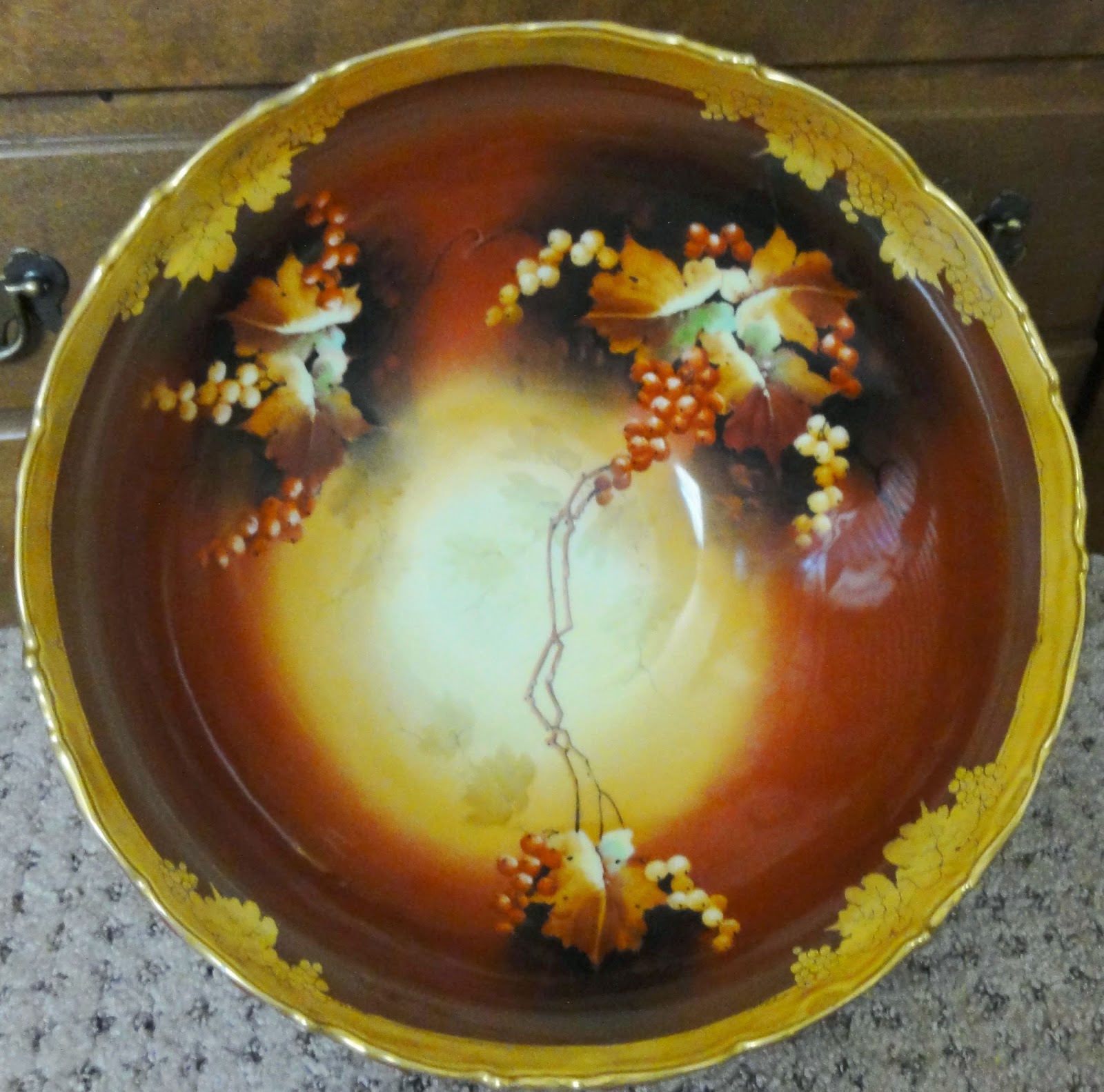 Thanks to my Great-Grandmother DeLong for her foresight in purchasing this punch bowl many, many years ago; and for choosing me to be the caretaker of it during my generation!

I'm joining the following:
The Dedicated House for Make It Pretty Monday
My Uncommon Slice of Suburbia for Inspire Me Monday
Our Home Away from Home  for Tuesdays At Our Home
Knick of Time for Knick of Time Vintage Tuesday
A Stroll Thru Life for Inspire Me Tuesday
Ivy and Elephants for What's It Wednesday
Savvy Southern Style for WOW Us Wednesdays
Have a Daily Cup for Share Your Cup Thursday
Posted by Salmagundi at 2:05 PM 3 comments:

I usually hang something seasonal by the front door on our porch -- this year for Fall I went with something rustic. 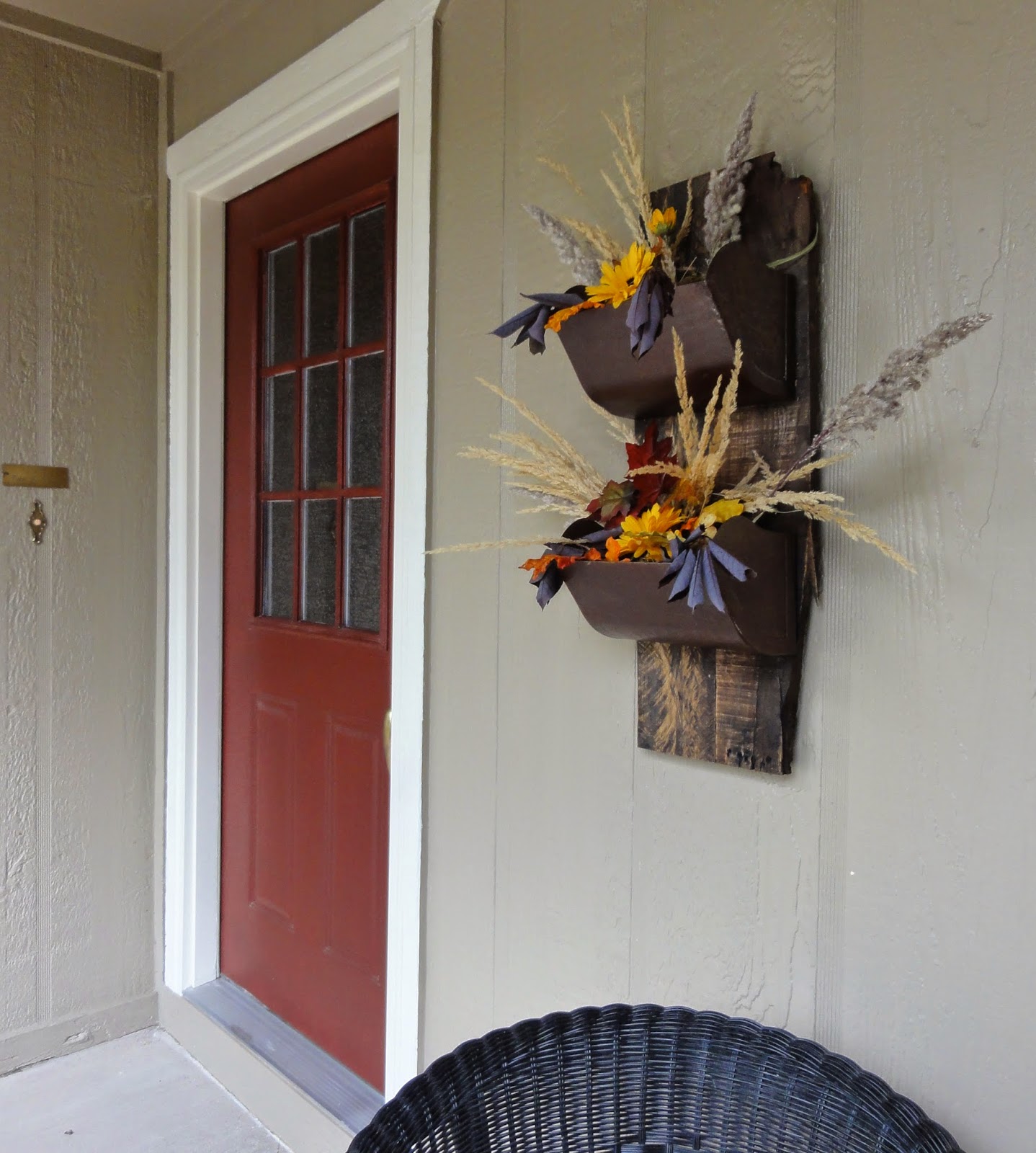 On our last visit to the farm salvage yard (my favorite shopping mecca), I picked up some grain elevator scoops.  I had no idea what I was going to use them for -- just loved their shape and patina. Bob mounted two of them on a couple of old boards, and I filled them with a touch of autumn. 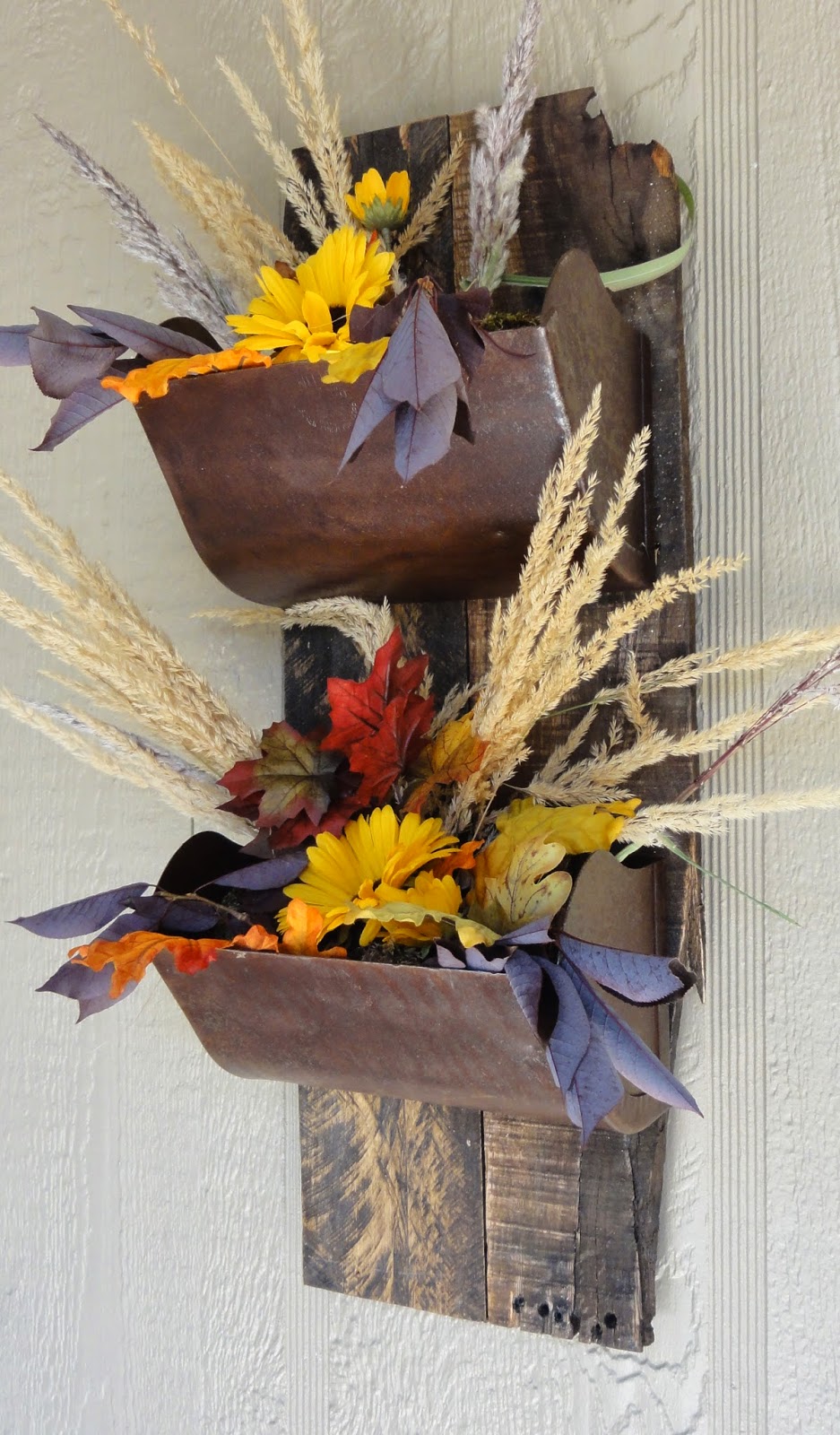 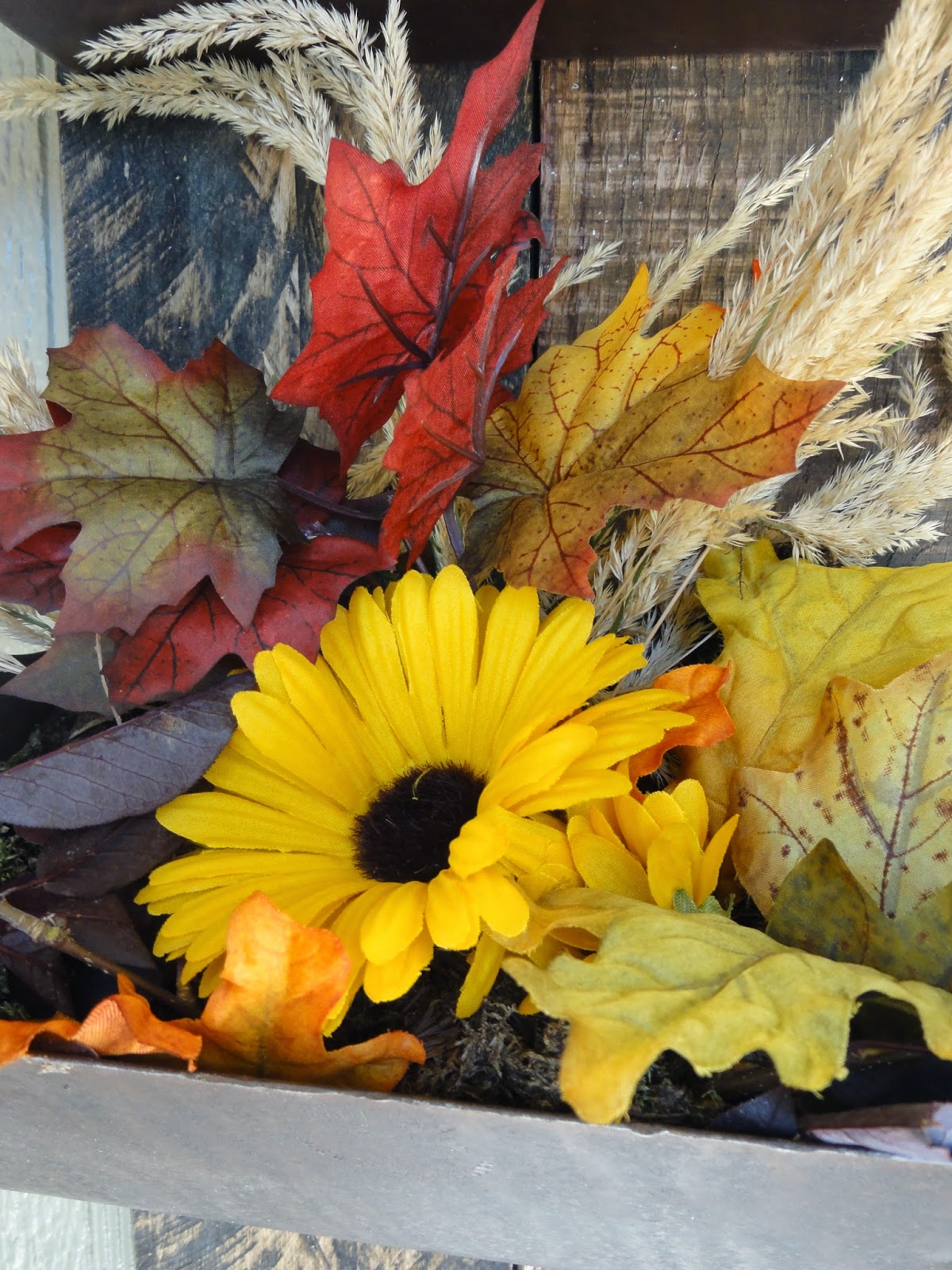 I've written before about my love affair with farm salvage yards!  You can check those posts out here and here.

Here's a picture of my favorite farm salvage yard -- if you see one along the way, don't pass it up -- treasures await! 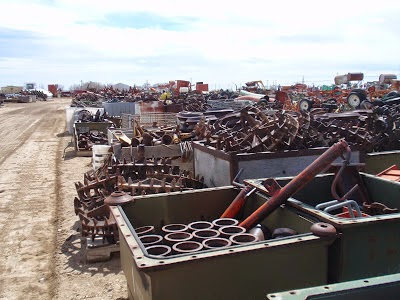 I'm joining the following:
Savvy Southern Style for Falling For Fall Porch Party on 9/22/14
The Dedicated House for Make It Pretty Monday
My Uncommon Slice of Suburbia for Inspire Me Monday
Confessions of a Plate Addict for The Scoop Tuesday
A Stroll Thru Life for Inspire Me Tuesday
Coastal Charm for Show and Share Tuesday
Ivy and Elephants for What's It Wednesday
From My Front Porch to Yours for Treasure Hunt Thursday
Have a Daily Cup for Share Your Cup Thursday
Nancherrow for Fridays Unfolded
French Country Cottage for Feathered Nest Friday
Chic on a Shoestring Decorating for Flaunt It Friday
Posted by Salmagundi at 3:41 PM 10 comments:

Last week we celebrated our 56th wedding anniversary, which made me think about all of the houses we have lived in over the years.  From the beginning, we have been nesters - always working on our homes -- gallons of paint, yards of curtain fabric, etc.
Our first apartment -- we were newly-married teenagers, in college, and no money.  We rented this furnished basement apartment for $45 a month.  We scrubbed the two rooms; I made new curtains; and then instead of a honeymoon with our wedding money we bought our first automatic washing machine (we didn't own another stick of furniture). We were proud of our first nest even though it really was a dark little dump.
We then moved to this nicer basement apartment closer to campus.  I made more curtains for tiny little basement windows.
After graduation, we moved to Denver and a second floor apartment - no more basements.  These metal kitchen cabinets were the turquoise color popular in the 1960s.
We tired quickly of second floor living and moved to a duplex where we could again have our own washing machine.  I made more curtains.
Our dream finally came true to buy our first house.  We bought this cute little house with the smallest kitchen in the world on a half acre in Lakewood, Colorado.  What fun we had -- painting, refinishing floors, making more curtains, and having our first garden.  Remember these portable dishwashers?
Grad school was beckoning, so we sadly sold our first house, moved back to Ft. Collins, Colorado, and bought this little house for $12,500.  I can't believe that we painted these kitchen cabinets pinky-orange.  I made white dotted-swiss curtains -- it really did turn out charming!
After graduation (again), we took a job in Sidney, Montana. We couldn't find anything to buy, so we rented this house for nine months (I made more kitchen curtains).
We were expecting our first child, and finally found this house to buy.  It had the world's second smallest kitchen.  We became a family of three here.
But, oh, how I missed Colorado.  A job opportunity presented itself to move back to our hometown of Rocky Ford, Colorado.  Along with the job of City Engineer came the benefit of living in the city house by the water plant rent free.  It was a lovely old house built in 1899.  We tried to buy it as we missed owning our own house, but the city declined.  We became a family of four in this house.
The urge to own our own house again was strong, so we built this new house and included a built-in dishwasher.
Finally the city decided to sell the 'house on the hill' to us for $25,000.  We sold our new house and moved back to the old house -- who does that?????? -- leaving a brand new kitchen for a tiny remuddled 1940's kitchen. (Which I had found impossible the first time we lived in this house.) We had to buy a portable dishwasher again!
And, the work began.  Bob began stripping the paint off the woodwork - there were eleven doors and windows in the living room alone.  The house had a total of 61 windows -- we added wood shutters to several windows, but I also made lots and lots of curtains. 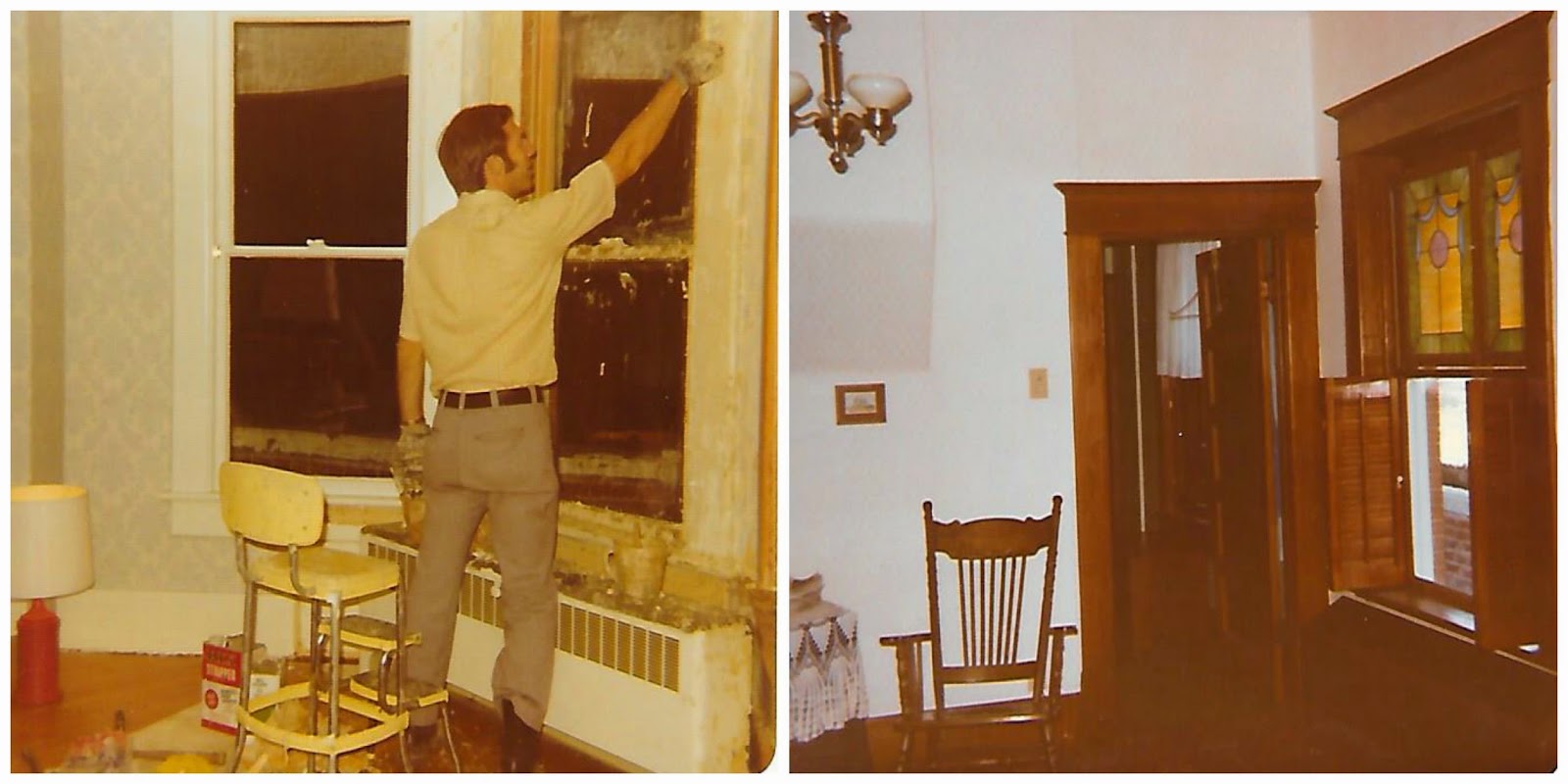 Once again a new job opportunity called us to move.  We sold the 'old house on the hill' for twice what we had paid for it and we bought this tri-level in Canon City, Colorado.  We lived in this house 10 years; and I still couldn't find a single picture of the kitchen after we changed out the avocado appliances and painted the dark kitchen cupboards a pretty blue.
All of a sudden we had an empty nest, and we were yearning for another old house to work on.  This house deserves a post of its own - I have so many good before and after pictures of all of the work we did on this house.  However, all of the ladder work and the stairs finally got to me; I had both hips replaced while living here.
The bungalow sold quickly and we bought what has become our forever house.  I've never lived in a house for this long my entire life; but it has become the perfect retirement house.   After 56 years, we're still nesting big time -- always coming up with new projects.  We renovated the kitchen last winter, and Bob just finished painting the screened-in porch floor this last week!  He's the handy, energetic one - he can put the paint on or he can take it off - I'm lucky as all I have to do is ask!!!!
Each one of these homes hold special memories from different stages of our lives.
I've always loved moving, and every move was made with great anticipation; but we are really quite content now right here in our forever house.

I'm joining the following:
Between Naps on the Porch for Metamorphosis Monday
The Dedicated House for Make It Pretty Monday
My Uncommon Slice of Suburbia for Inspire Me Monday
Coastal Charm for Show and Share Tuesday
Kathe With an E for You've Gonna Love It Tuesday
A Stroll Thru Life for Inspire Me Tuesday
Savvy Southern Style for WOW Us Wednesday
Have a Daily Cup for Share Your Cup Thursday
Imparting Grace for Grace at Home Thursday
Chic on a Shoestring Decorating for Flaunt It Friday
The Charm of Home for Home Sweet Home Friday
Pieced Pastimes for Saturday Sparks
Posted by Salmagundi at 1:17 PM 13 comments:

Email ThisBlogThis!Share to TwitterShare to FacebookShare to Pinterest
Labels: our houses

A few months ago, we bought this vintage wicker chair to use in the living room for extra seating  - it's only fault was that it did not have a cushion.  I thought -- no problem -- I've made lots of cushions and pillows over the years. 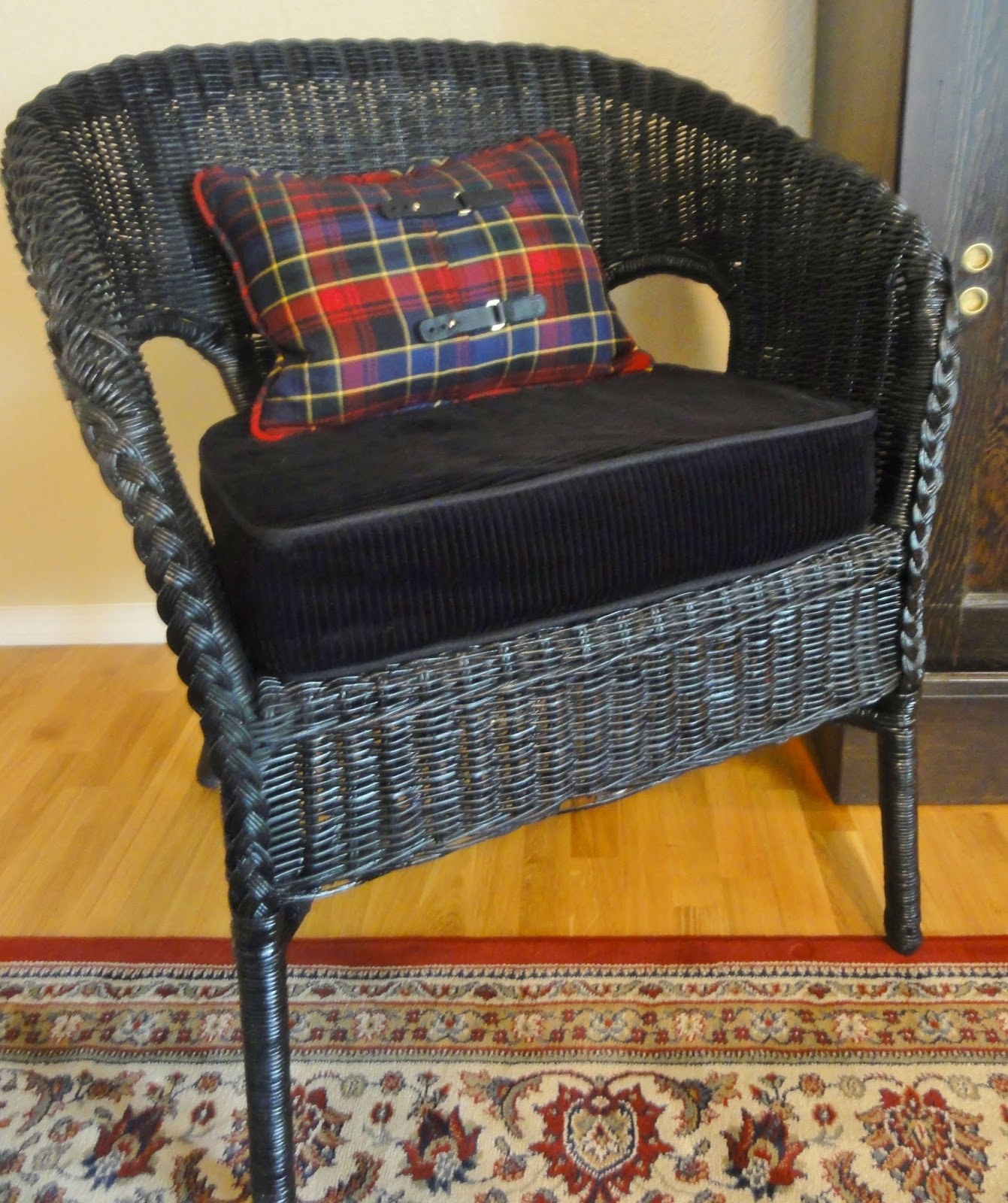 I decided that I did not want to make a design statement with the cushion, because I like to change out the pillows and throws occasionally.  So, I ended up choosing an upholstery-weight black corduroy and a black poplin for the cording to provide a little textural contrast. 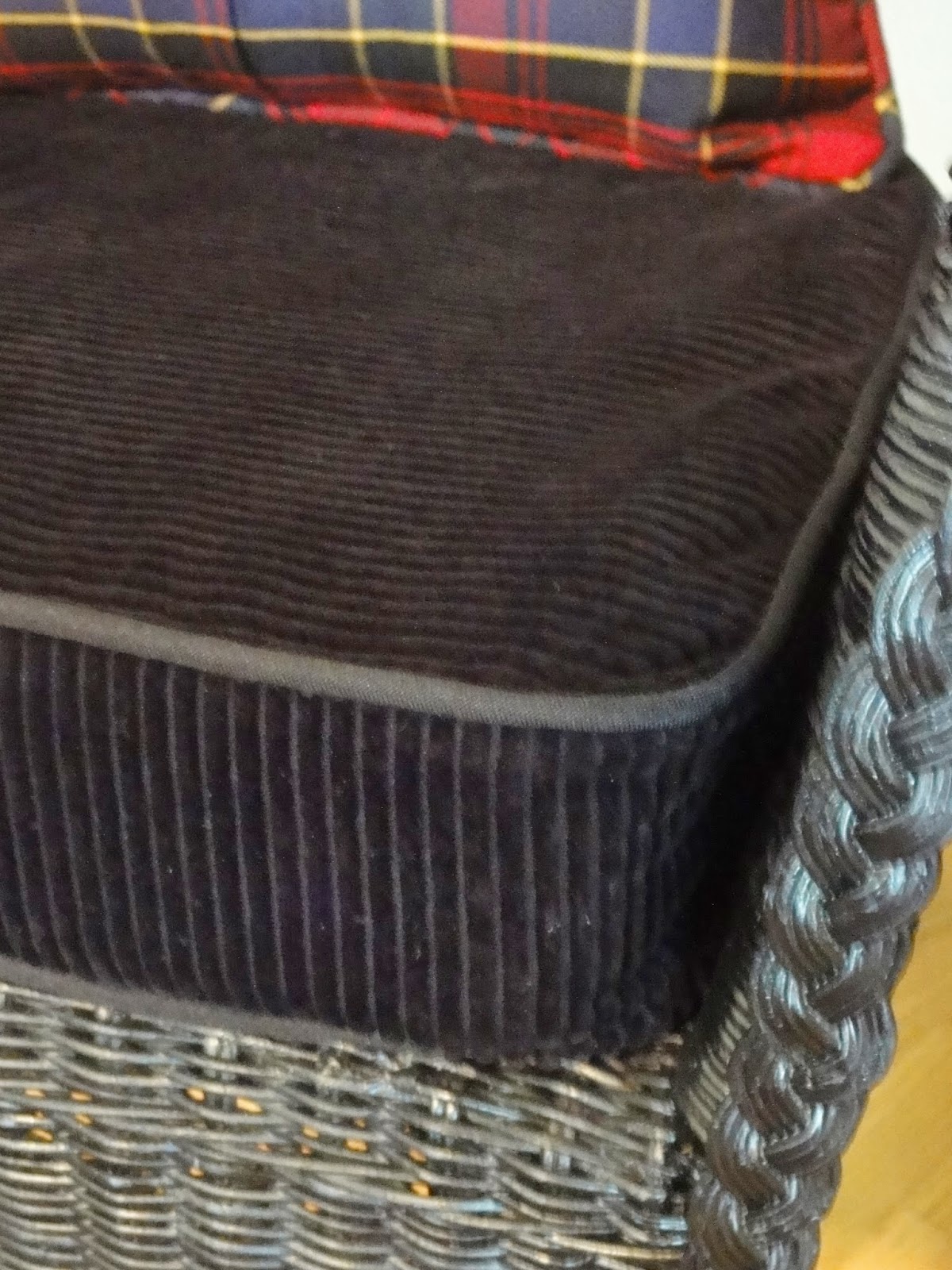 Procrastination set in big time at that point.  I couldn't make myself work on the cushion.  Sewing black on black -- the light had to be JUST right in the sewing room I told myself -- a lot of cloudy, rainy days this summer!
"Tomorrow!"
"Boring work on something neutral and simple!"
"Tomorrow!" 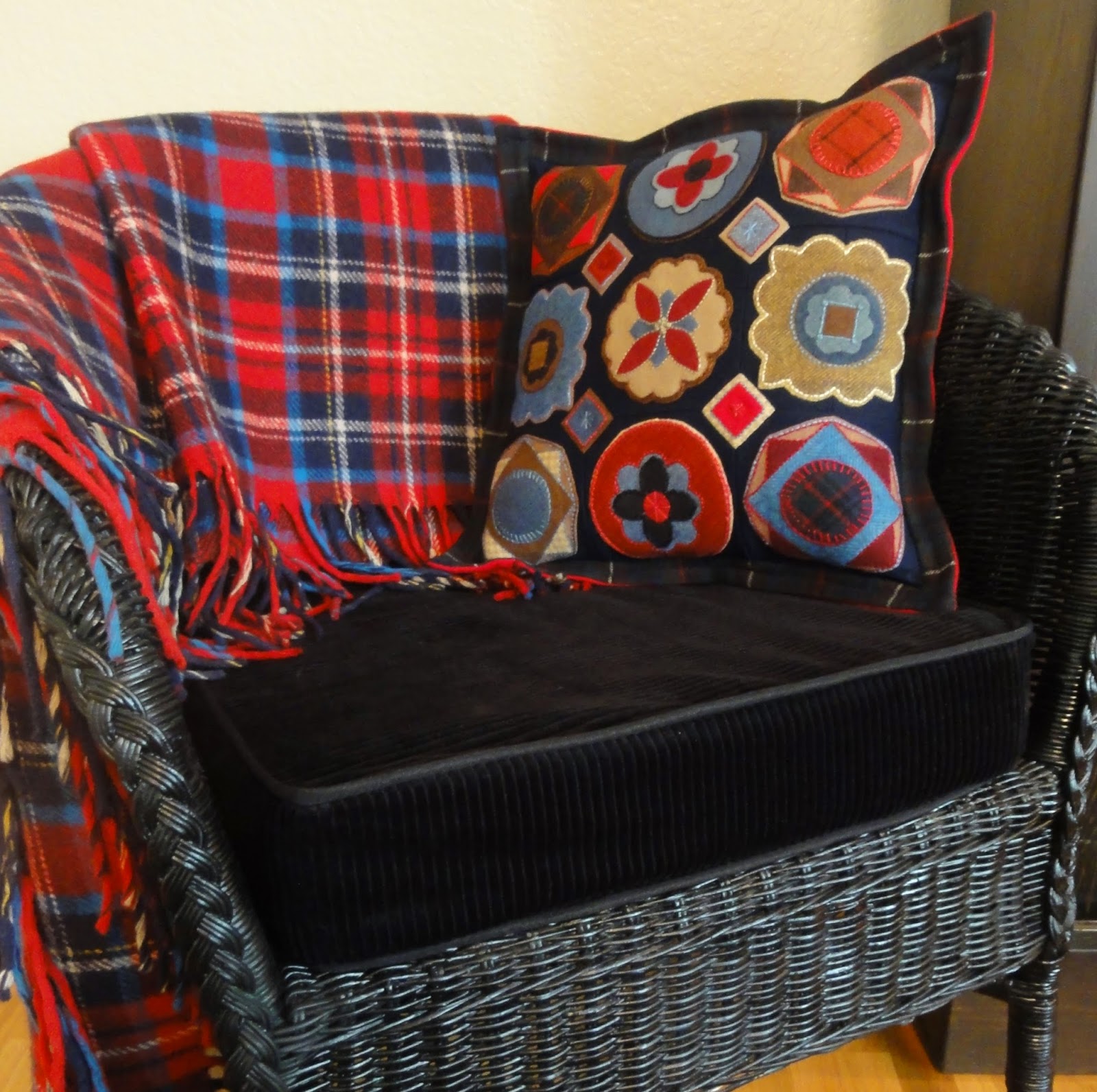 Finally, a month ago, I made myself start -- telling myself that I only had to work on it 15 minutes each day until done. 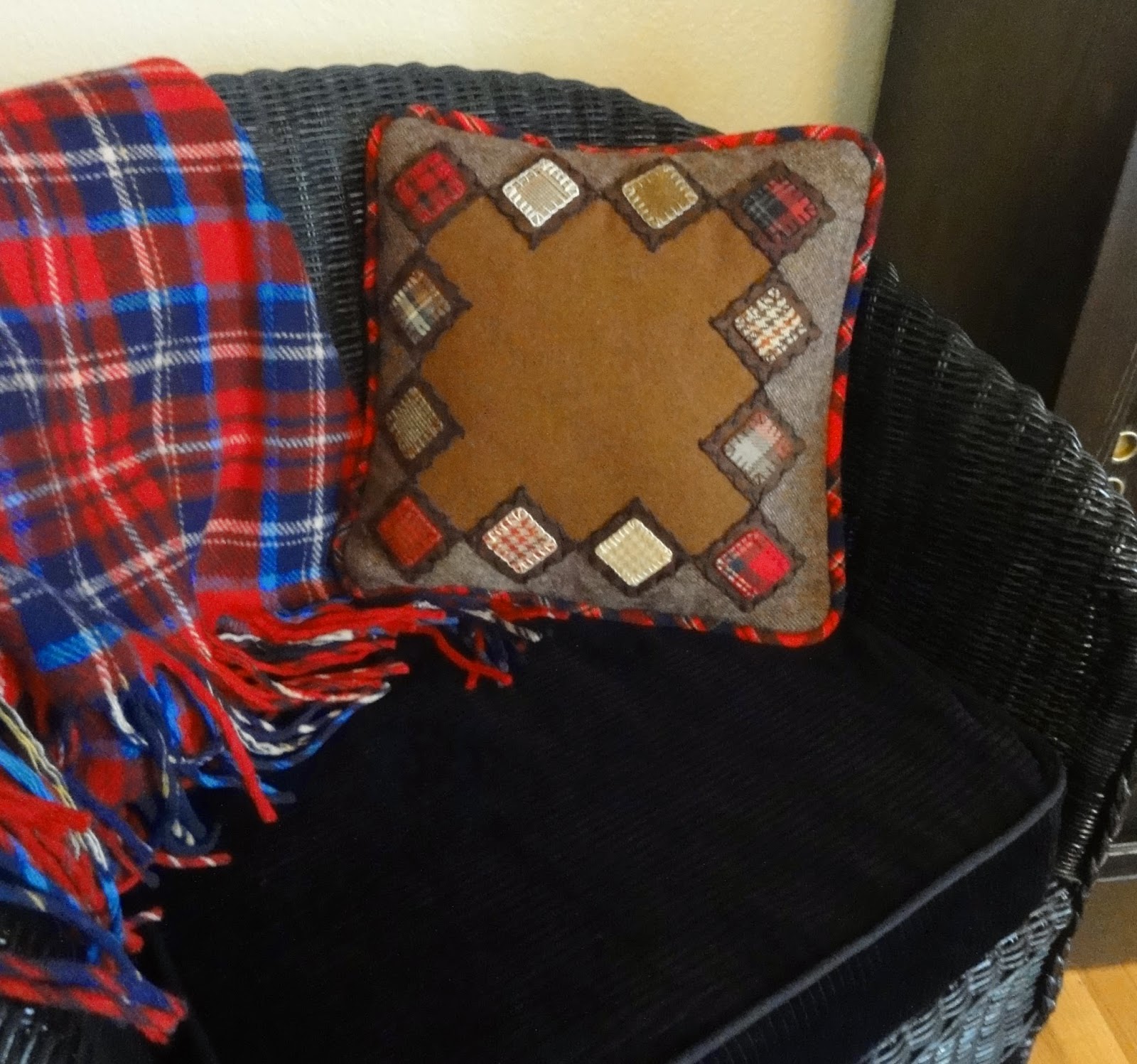 It only took three months to accomplish a day's worth of work.
Whatever -- I love the finished product. 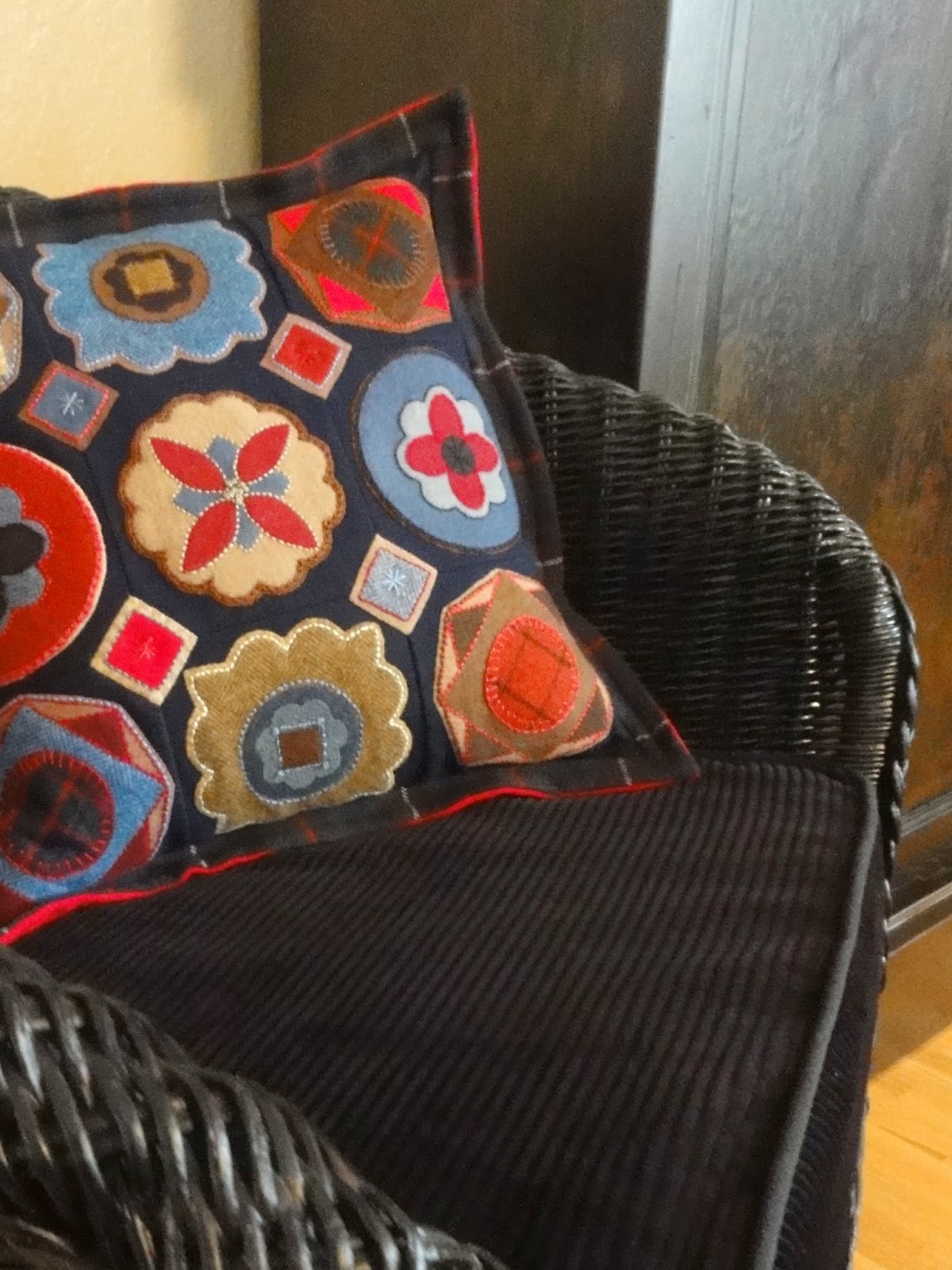 I've never thought of myself as a procrastinator as I've always jumped right in and got it done.
But, guess I've become one.  My apologies to my family for all of the harping on the subject over the years.

Do you procrastinate or get it done right away?

I'm joining the following:
The Dedicated House for Make It Pretty Monday
Boogie Board Cottage for Masterpiece Monday
Confessions of a Plate Addict for The Scoop Tuesday
A Stroll Thru Life for Inspire Me Tuesday
Green Willow Pond for What We Accomplished Wednesday
Ivy and Elephants for What's It Wednesday
Have a Daily Cup for Share Your Cup Thursday
The Charm of Home for Home Sweet Home Friday
Nancherrow for Fridays Unfolded
Posted by Salmagundi at 6:30 PM 6 comments:

SUNDAY IS OUR WEDDING ANNIVERSARY ---

Celebration plans of the best kind:
church -- out for lunch -- day spent with the grandkids!

Did you know that the first Sunday in September after labor day is National Grandparent's Day?  It was designated as such by President Carter in 1978.  This year it happens to fall on our wedding anniversary!!

Hope you get to celebrate with your special young people, too.