We've been looking for an industrial cart for awhile to use on our screened-in back porch as a coffee table.  But, we knew that we would NOT be paying $1200.00 for one like we saw a couple of weeks ago at an antique mall in Colorado Springs. 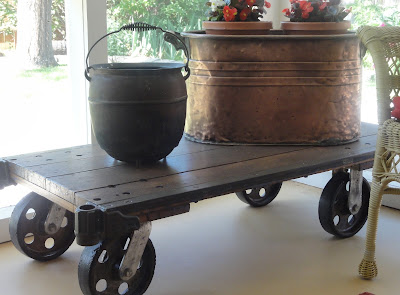 I was excited when Bob came home from a local yard sale with this one -- it's not as fancy as the $1200.00 one; but still a pretty neat specimen.  AND, IT ONLY COST $20.00 - YES, TWENTY DOLLARS!
It has big, heavy industrial wheels and was manufactured by the Nutting Truck and Caster Company in Faribault, Minnesota.
It also has the two brackets for placement of poles for guidance. 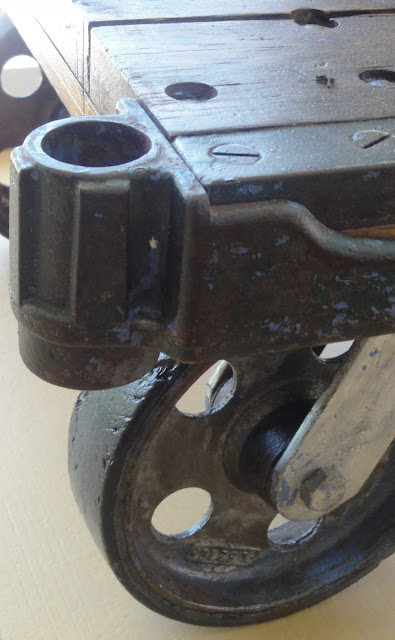 There is evidence of both blue and green paint from sometime in its past.  The yard sale person thought that it had been used in a creamery. 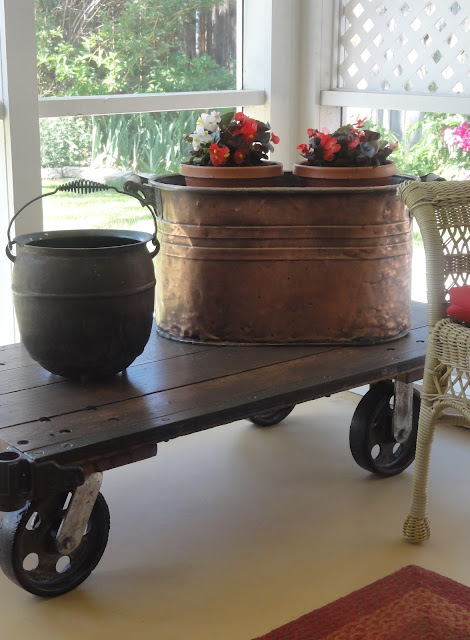 It's now retired and its only job is to hold my begonias and to satisfy my urge for some industrial chic.  Love it!!

I'll be joining the following parties this week.  Please go by these blogs and thank them for hosting such fun parties each week.
Savvy Southern Style for Wow Us Wednesdays
From My Front Porch to Yours for Treasure Hunt Thursday
Common Ground for Vintage Inspiration Friday
Miss Mustard Seed for Furniture Feature Friday
Funky Junk Interiors for Saturday Nite Special
Southern Hospitality for Thrifty Treasures Monday
My Uncommon Slice of Suburbia for Tuesday Treasures
Coastal Charm for Nifty Thrifty Tuesday
Posted by Salmagundi at 5:59 PM 30 comments:

We have been able to finish up a couple of projects this week.
Forever, I have been on a mission to outfit all of my base cabinets in the kitchen with sliding drawers.  And this week, Bob finished making the six drawers for the last two cupboards!  They are wonderful -- so much easier on this old back to access stuff.   The two base cupboards contained most of my good crystal serving pieces, vases, punch bowl/cups.  It was almost impossible to retrieve them previously without standing on my head.  And, of course, I couldn't put everything away without washing all of it.  Now, there are just 16 more cupboards to clean in my late effort to do some spring cleaning. 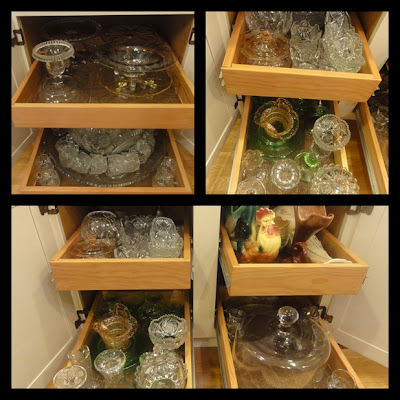 Also, on the agenda this week is to get the outside of the house and the windows all washed.  Yesterday, we took everything from our screened-in porch out on the lawn to scrub the winter dirt away!  We plan in the next couple of weeks to make a couple of changes on the porch -- so I'll wait until then to take some photos out there.

In my continuing effort to acquaint myself with my new sewing machine, I decided to make a quilted table runner.  In the past, I've always machine-pieced my quilt tops, but always hand-quilted the layers together.  With the new machine and all of its bells and whistles, I decided to try machine quilting.  This is my first effort.  It was fun, but I still prefer the hand-quilted look. 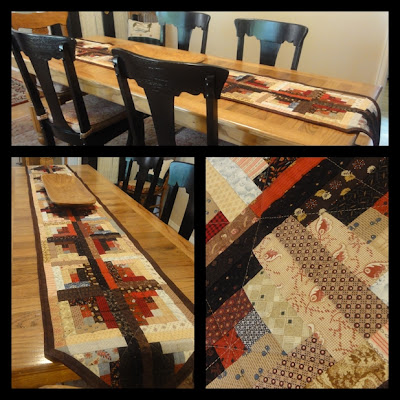 Our table is 7 feet long so it took 28 'Courthouse Steps' blocks to make the runner.
Lot's of work planned for this week -- better get going!!!


I'm joining the following parties this week.  Please check them out for inspiration -- you won't be disappointed.
Savvy Southern Style for Wow Us Wednesdays
No Minimalist Here for Thursday Open House
The Charm of Home for Home Sweet Home Friday
Funky Junk Interiors for Saturday Nite Special
Dear Little Red House for Mosaic Monday
A Stroll Thru Life for Table Top Tuesday
Posted by Salmagundi at 3:34 PM 14 comments:

Our perennial garden is at its best this time of the year.  Colorado is an arid state, and once it gets hot and dry, the flowers suffer.  Water is very expensive here, but we do water a lot to keep the gardens going for the rest of the summer, but they just aren't at their peak later on.
Right now -- our roses are putting on a show! 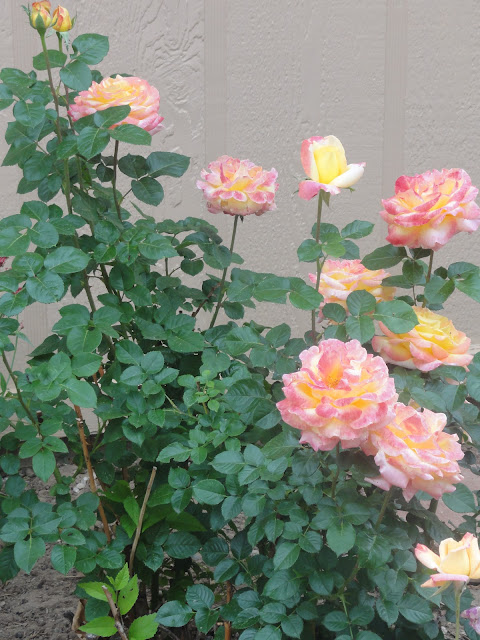 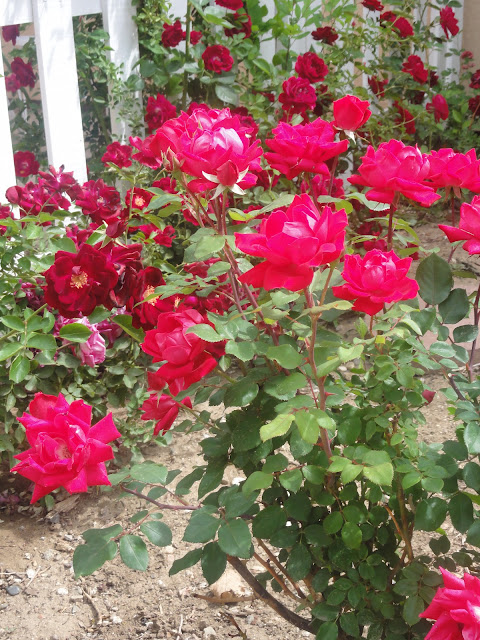 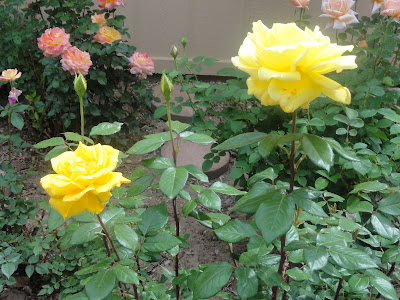 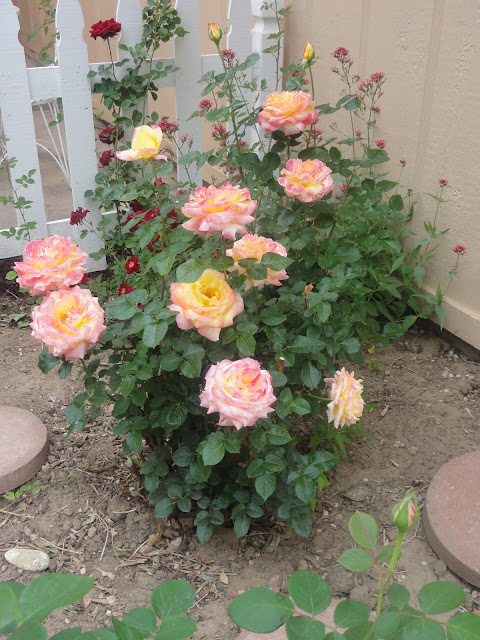 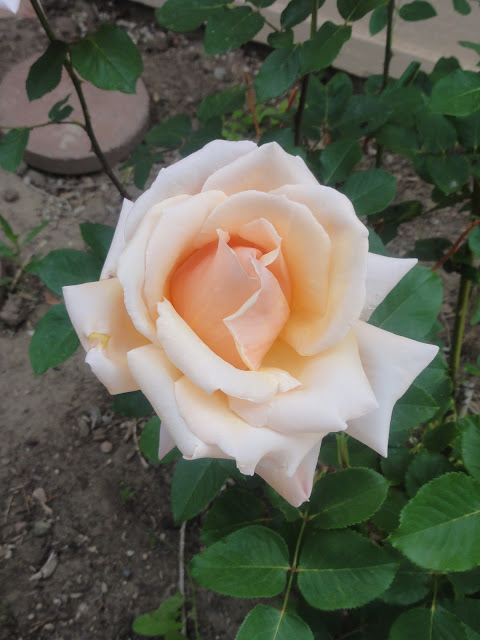 The peonies are lush.  I picked a bouquet for the house today. 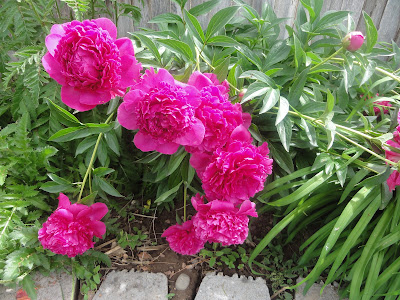 My favorite red poppy is blooming.  They usually bloom on Memorial Day, but I'm afraid they will all be gone by then this year. 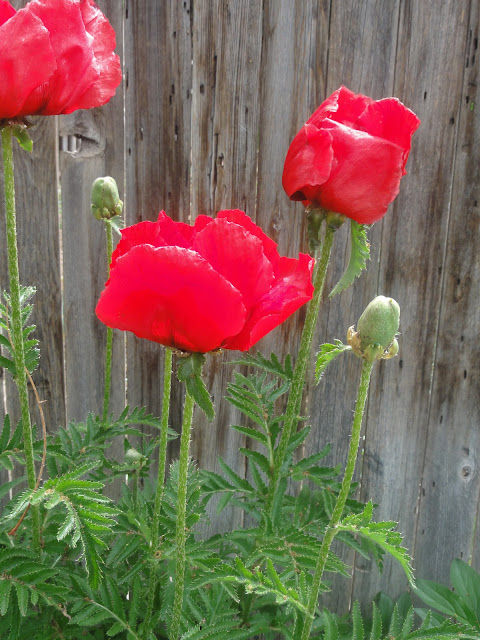 And this beauty was a gift from Mary Ellen at
Mary's Meanderings that she shared with me two years ago. 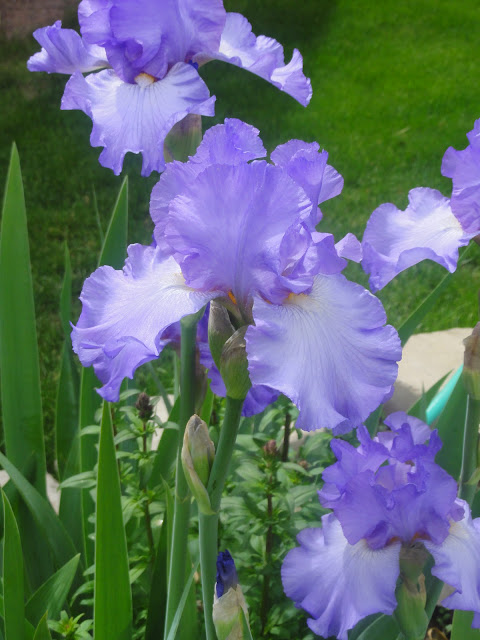 We have also scads of old-fashion rose bushes covered with blossoms.  The one by our shed is at least 10 feet tall, and has been covered with pink, fragrant blooms.  Plus, the spirea and valerian are blooming.

Bob has planted all of the annuals that do the best in our hot, dry climate - geraniums, petunias, zinnas, allysum, and impatiens.  And the vegetable garden is looking good - we've already harvested lettuce.  I can not take any credit for our beautiful yard.  I wouldn't work out there in all of that dirt and sun for anything.  Bob does all of the yard work.  I just enjoy his efforts.

May you all have a sweet-smelling weekend!!

By the way, Bob found something pretty special at a yard sale this morning.  I can't wait to show you next week after we get it cleaned up.


I'll be joining The Polohouse for Favorites on the First.  Please check it out for more garden inspiration.

Email ThisBlogThis!Share to TwitterShare to FacebookShare to Pinterest
Labels: flowers 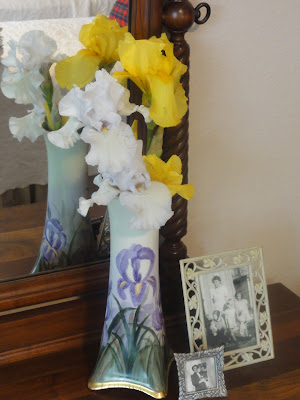 My mother was an impeccable housekeeper and a green-thumb gardener. She even ironed her cleaning cloths because she said they looked better in the drawer. Her garden was full of flowers, especially lots of roses; and she brought into the house bouquets every day. Until I was in grade school, I thought everyone lived that way. Didn't everyone have a hand-painted iris vase with iris in it on their dressing table; or roses floating in a crystal rose bowl on the breakfast table? And, why wouldn't you iron and dust everything in site?? I realized that my mother had something special going on, as not only was I and the house her focus; she worked full time building her career for 40 years with the U. S. Government. Among the many things she instilled in me, however, was a special appreciation for a sparkling household with beautiful things in it!
I miss her every day. 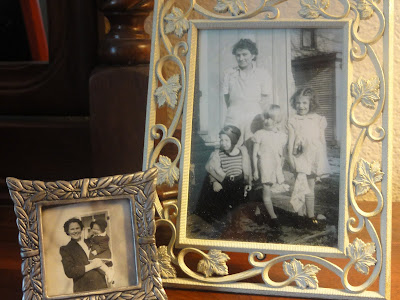 I've also been blessed with a great mother-in-law. When the stories circulate about mother-in-law antics and problems, all I can say is that I sure didn't think I would have a mother-in-law for 53+ years. Yes, she will celebrate her 98th birthday next Wednesday. In her heyday, she was a prolific cook and seamstress while also working in the family grocery store plus she raised three kids. My mother was a great cook when she chose to, but she and I shared the same feelings about the kitchen -- it's at its best when clean and closed for the day. My mother-in-law, though, cooked constantly wonderful goodies - I've learned lots about cooking and sewing from her over the years.
The iris vase is the one that belonged to my mother, and it is sitting on her dressing table that now resides in our bedroom.
In the second picture, the small picture is of mother and I; and the larger picture is of my mother-in-law with Bob and his two sisters.
HAPPY MOTHER'S DAY, EVERYONE!
Posted by Salmagundi at 12:06 PM 5 comments:

We've all heard the sayings-- "If I had known how much fun grandchildren were; I would have had them FIRST!" -- "Grandchildren are the rewards for surviving your own children" -- etc.  It's true, grandchildren are one of the greatest joys in life.  Is the joy doubled because we are older and have matured in our own parenting skills? I know I definitely have learned how to pick my battles. Plus, it's nice to realize that we aren't totally responsible for their well being.
Compared to a lot of our contemporaries, we are fairly new to the grandparenting game.  Even though we were married in our teens, we didn't have kids until our thirties -- that put us behind schedule!  We should be having great-grandkids at this point, but we are so thankful for the two grandchildren we have.  Really, the joy they bring is incomparable.

When the grandkids were little they were so adorable, we just wanted to eat them up!  Sure they had their moments, but we had THE ULTIMATE GRANDPARENT TOOL  -- the ability to hand them back to their parents.  You know how that goes:  "Does anyone smell something?-- daughter, I think you better check for poopy pants!!  I'll hold them when they smell sweet again."  A super special time -- preschoolers are so curious learning new things every single day! 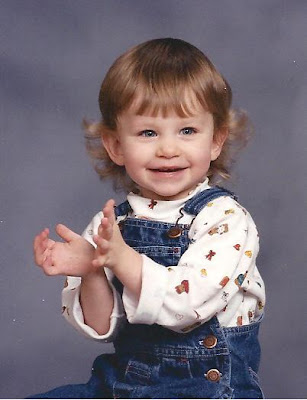 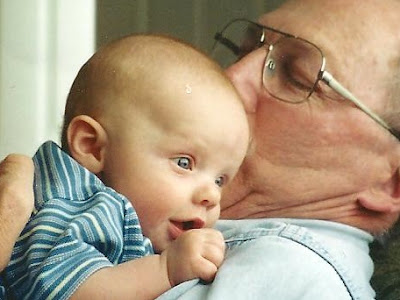 And then it hits -- They go to school!  Parents and grandparents aren't their only guiding light anymore.  There are all kinds of influences out there.
They develop attitudes!! 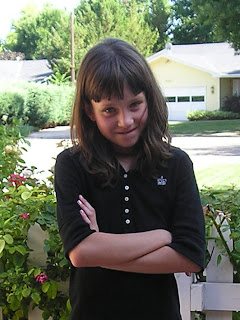 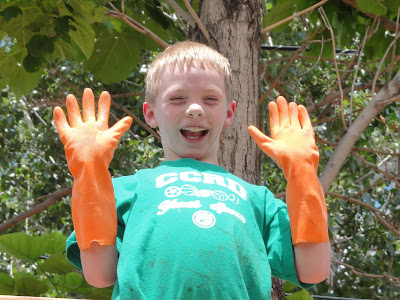 You always love them to death, but you don't always like them. But once again, the ultimate grandparent tool is a life saver.  Miss Attitude will never forget the day that Grammy had had enough, packed her up, and took her home to Mom several hours earlier than planned.  No one was happy (especially Mom as she had other plans for her quiet time!). After that the attitude problem ceased (at my house, at least.)

We have now entered my favorite stage of grand parenthood with our oldest - the high school years.  It is so exciting to see her mature searching for her way in life -- trying new things out, making good decisions the majority of the time. 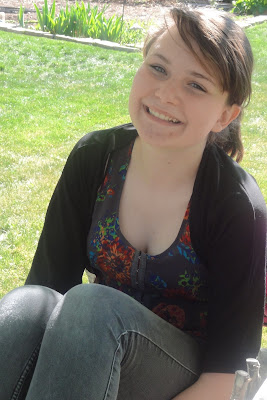 She is thinking about careers that suit her personality leaning toward something creative.  Last semester in school she even took an elective class in welding -- I think she has definitely eleminated that as a career option, however.  She has always enjoyed photography, and took a class last summer at the local college.  I was impressed with her eye for composition.  Right now with the importance of Facebook in teenager's lives, she is really into self-portraits and editing.  Here are a couple of pictures that I borrowed from her Facebook page that she took of herself, then edited. 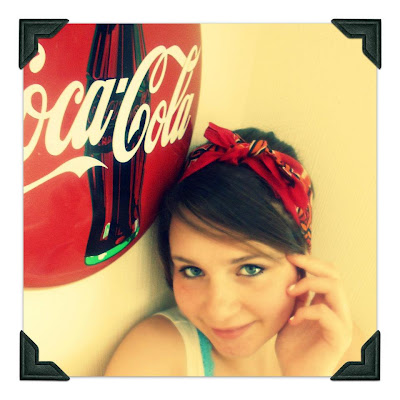 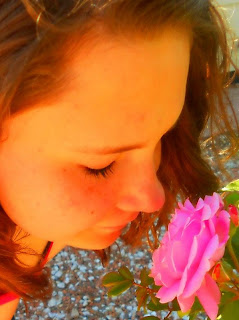 But who knows -- she has three more years of high school -- exciting times ahead!!
All I know is that I don't want to exercise the grandparent tool any more on her -- I want to keep her close forever.

P.S.:  I'm sure there will be more to report on our impish grandson after he outgrows the semi-obnoxious stage -- the grandparent tool is still needed in his case.
Posted by Salmagundi at 7:11 PM 3 comments:

Email ThisBlogThis!Share to TwitterShare to FacebookShare to Pinterest
Labels: grandkids

Last weekend we went to a great estate sale -- that is, the antiques were great; just not the prices.  The stuff was all probably worth the asking price, but were not in our range at all.
The only thing I bought was this little 5" silver vase.  I found it out in one of the sheds with junk -- that is probably why it was marked $4.  I wanted to pay $2, but prices were firm! 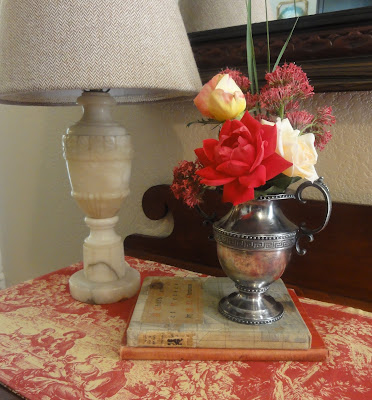 I love the Greek key design and the 'loving cup' handles; and thought it will be handy to use for little bunches of posies from the garden this summer. 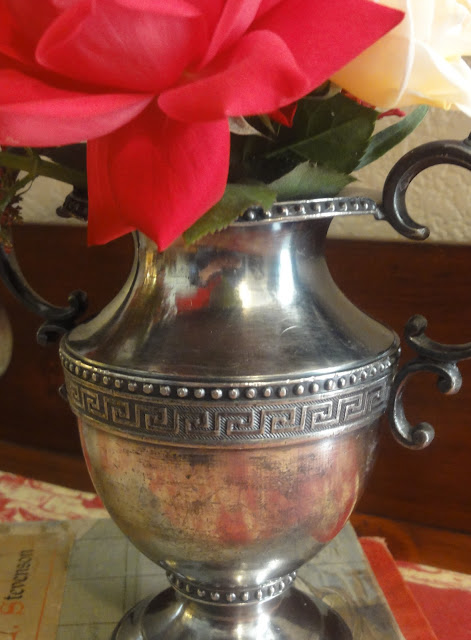 Our rose bushes are covered with buds and just beginning to bloom; which is about a month early for our region of the country. 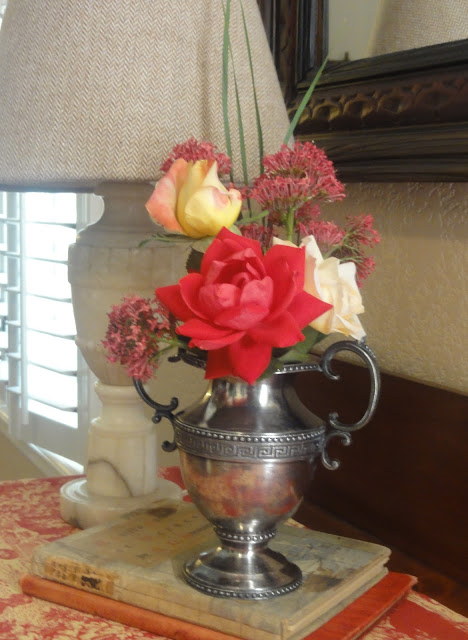 Cold weather is in the forecast for tomorrow -- hope they don't get frostbitten!

Check out the following blog parties this week for lots of summer inspiration.
Southern Hospitality for Thrifty Treasures Monday
Coastal Charm for Nifty Thrifty Tuesday
A Stroll Thru Life for Table Top Tuesday
From My Front Porch to Yours for Treasure Hunt Thursday
White Ironstone Cottage for Treasure Chest Friday
French Country Cottage for Feathered Nest Friday
Posted by Salmagundi at 1:01 PM 13 comments: