For about 20 years now my favorite collectible has been brown transferware.  Recently, I just haven't seen very much of it; and the prices have been almost out of my range. 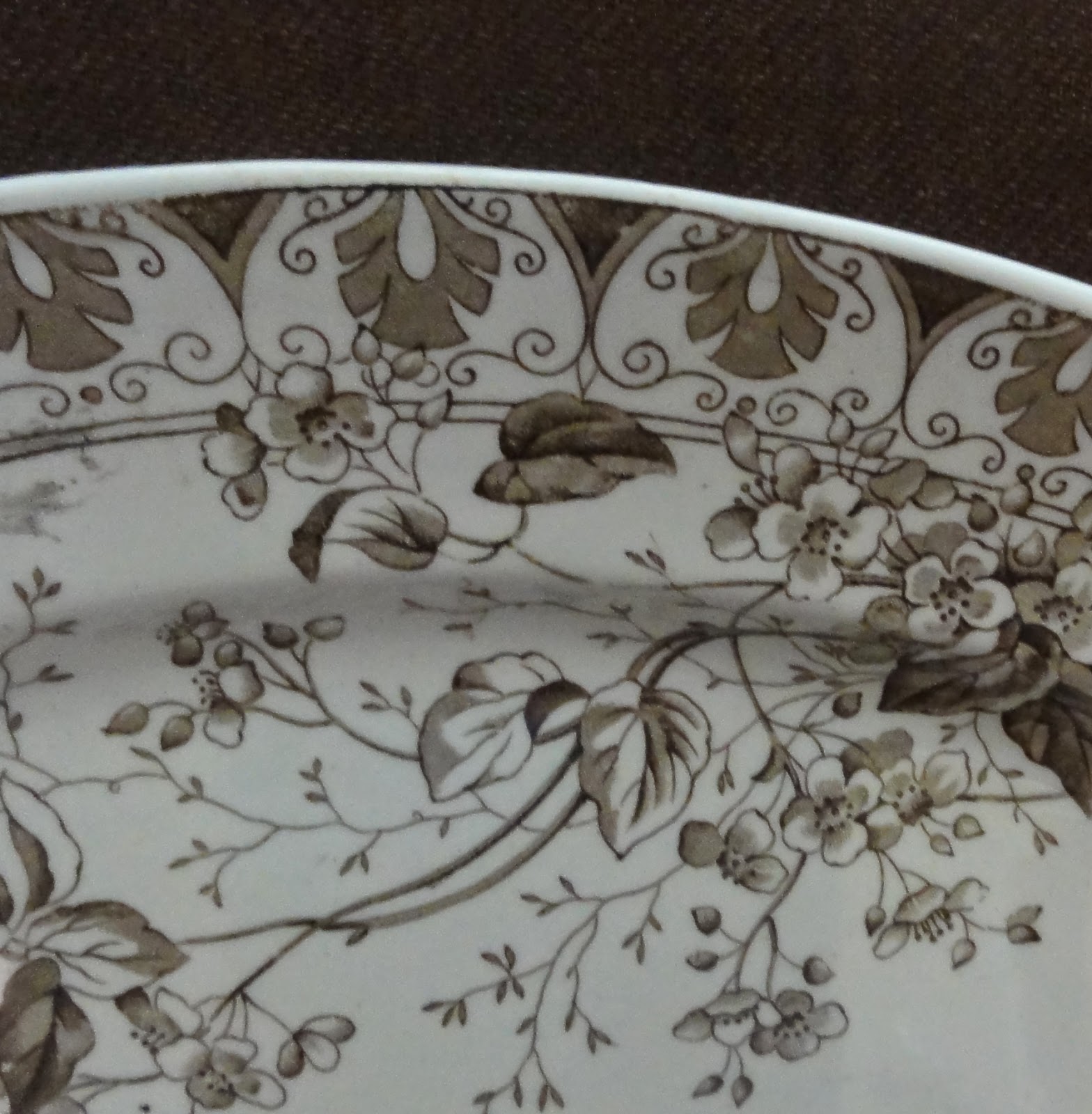 Ebay seems to have plenty of entries, but I prefer the hunt in person so I can touch and feel.
During the first part of our recent weekend in Denver, I didn't see a single piece.  Then I spied this pitcher all by itself in a booth with 1970s stuff. 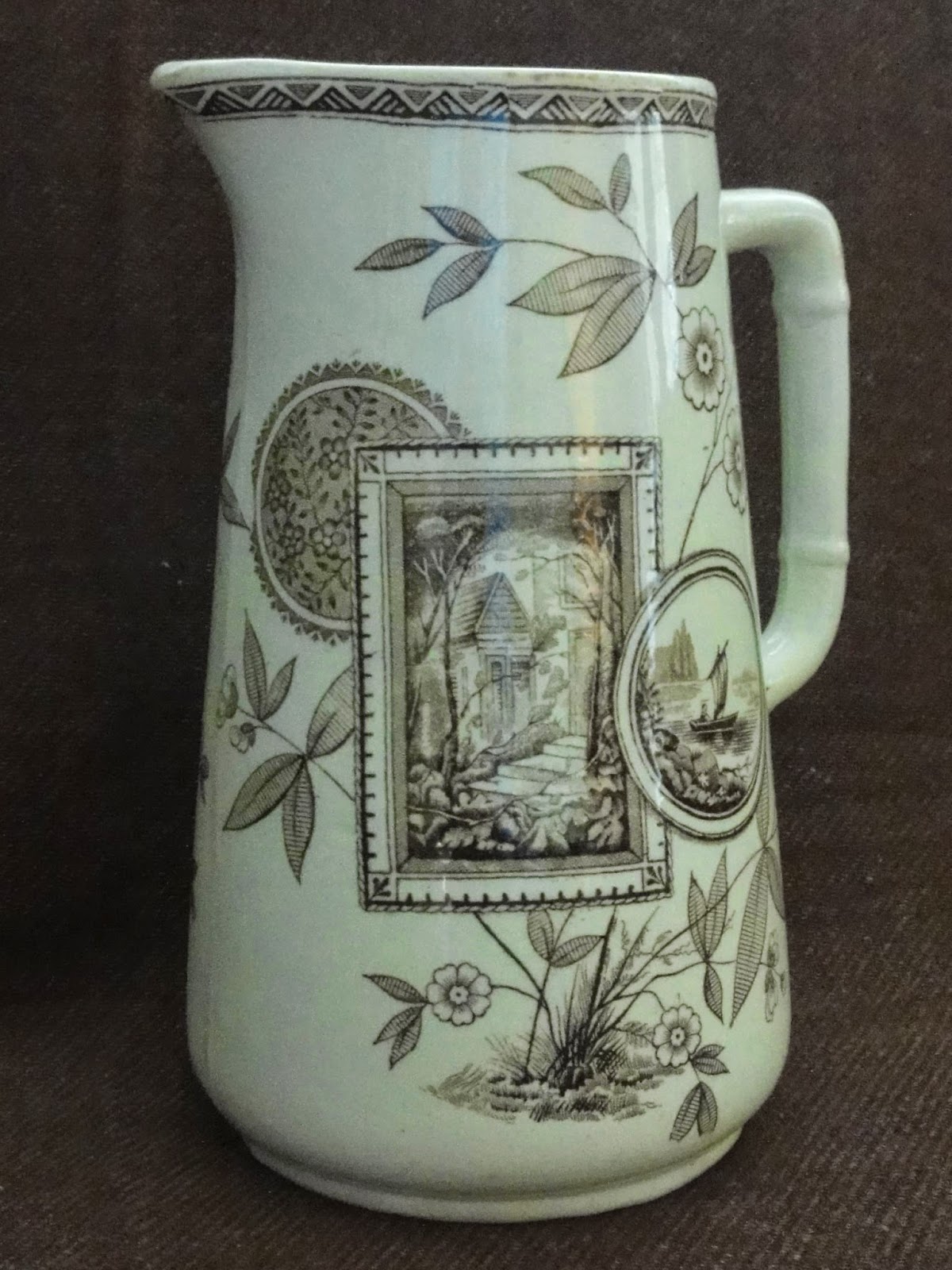 I knew right away that it was the Perak pattern from the James Beech Swan Works factory in England dating from around the 1870s (the aesthetic movement era).  It matches two plates that I already had in the pattern. 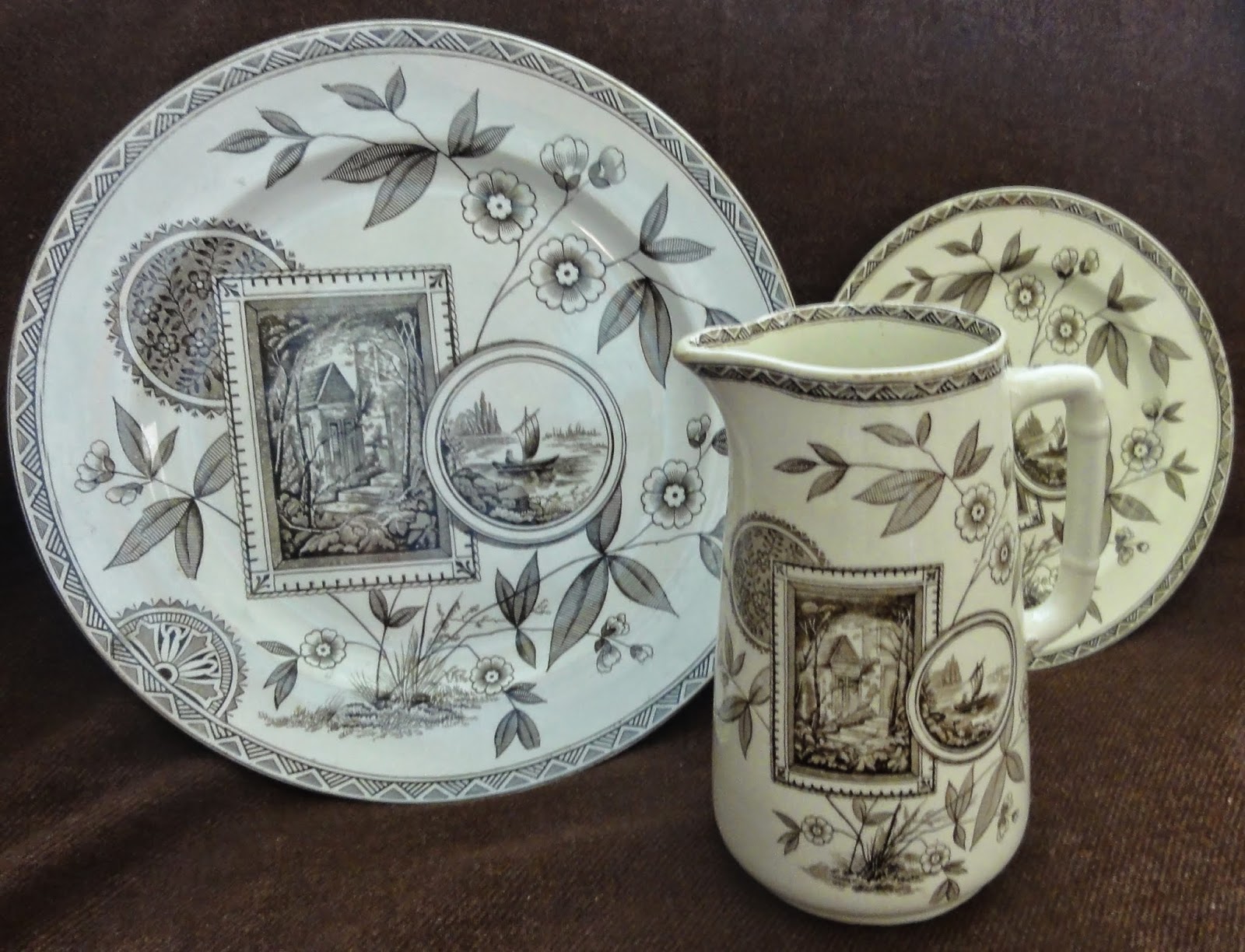 Then, at another antique mall, I spotted this 16" platter in the Rosalinde pattern (Parisian Granite) from Alfred Meakin in England.  My guess is that it dates from the late 19th century.  I was captivated by the beautiful border. 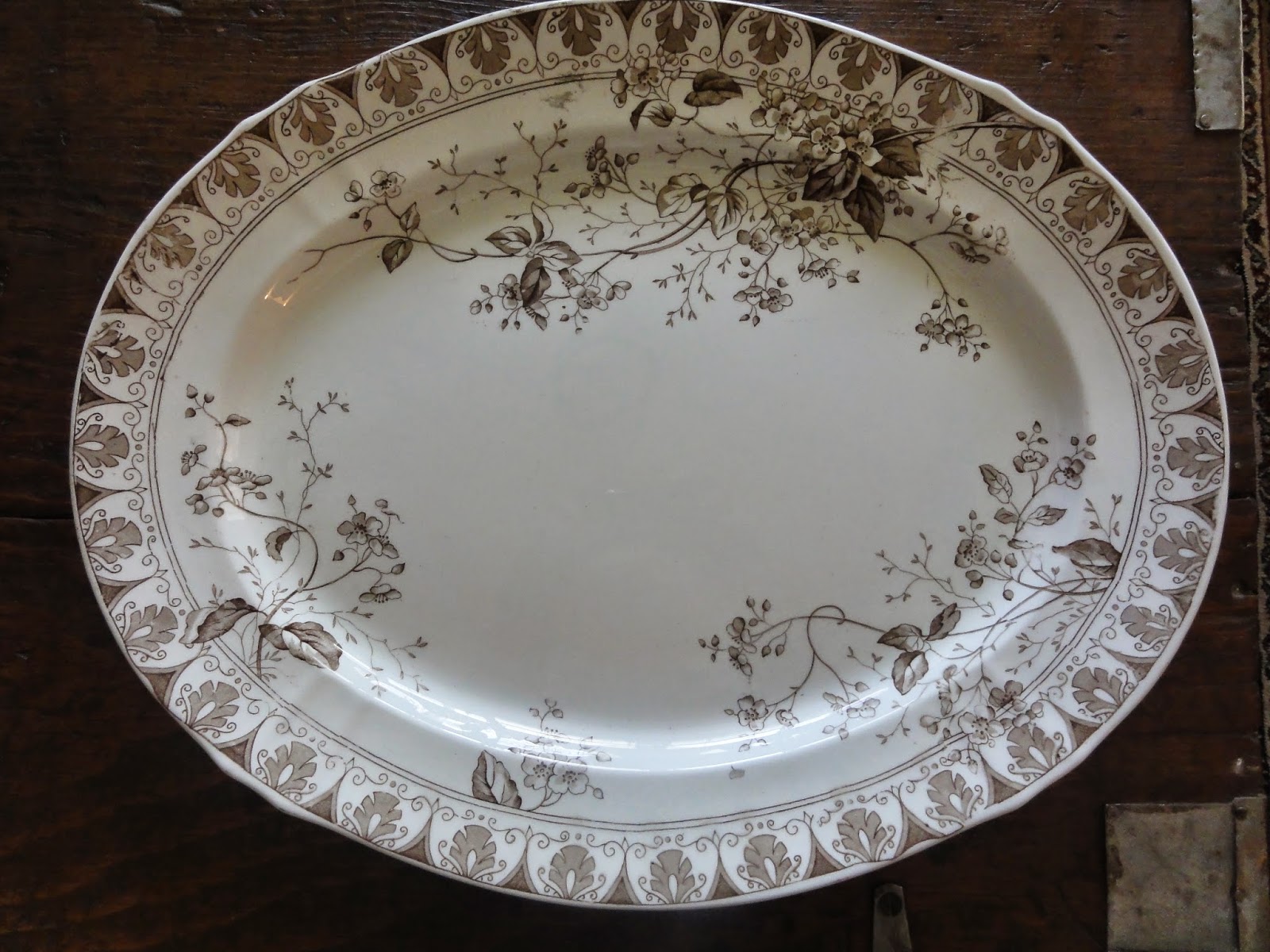 No wonder I loved it -- I didn't realize until I got home that I already had a large tureen in this same pattern. 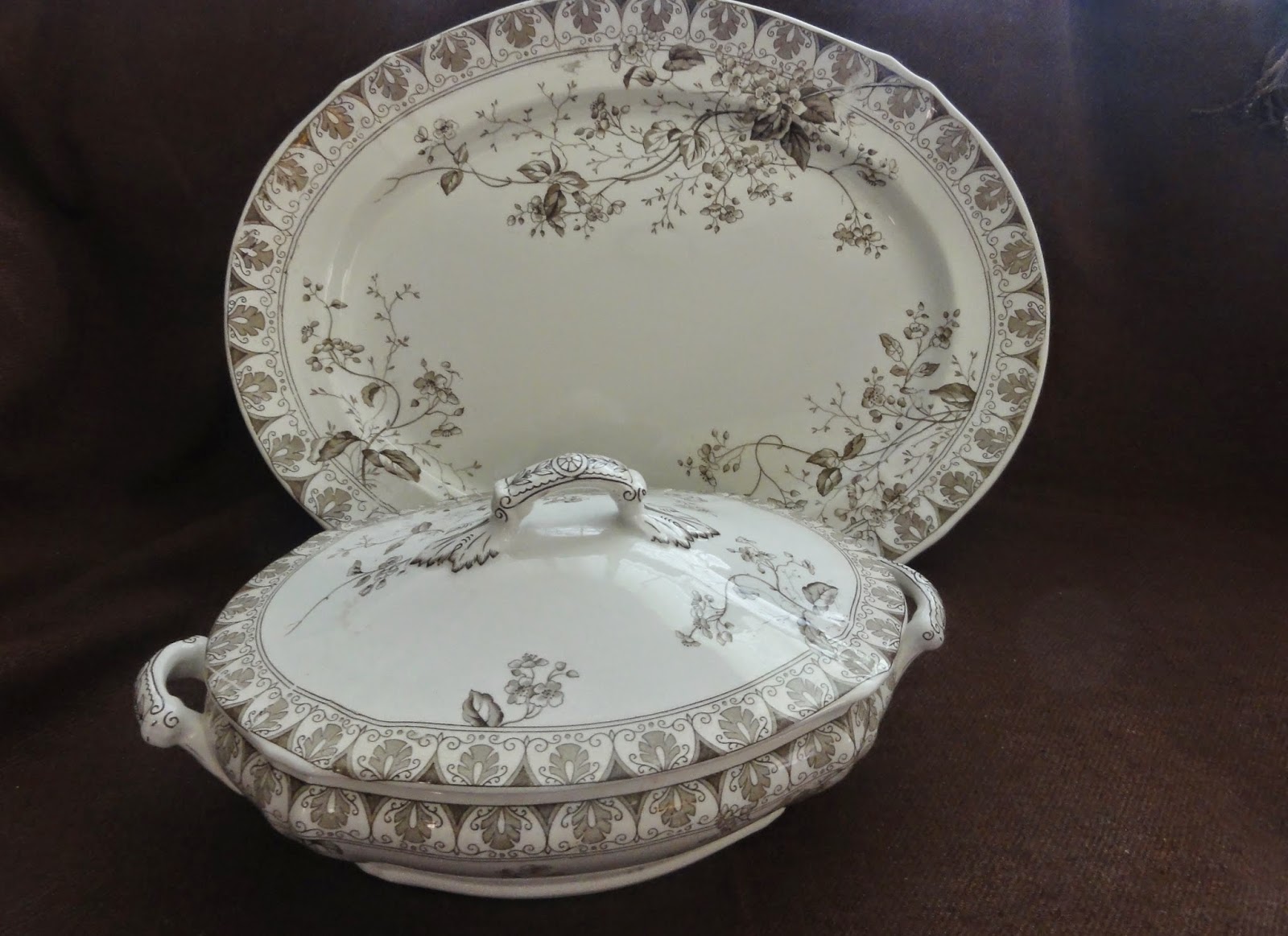 And then in the same antique mall, I found this pitcher in the Sylvan pattern from Johnson Bros.  The mark shows that it is dated sometime in the 1880s.  This jewel was also lounging around with some other dishes from the 1970s. 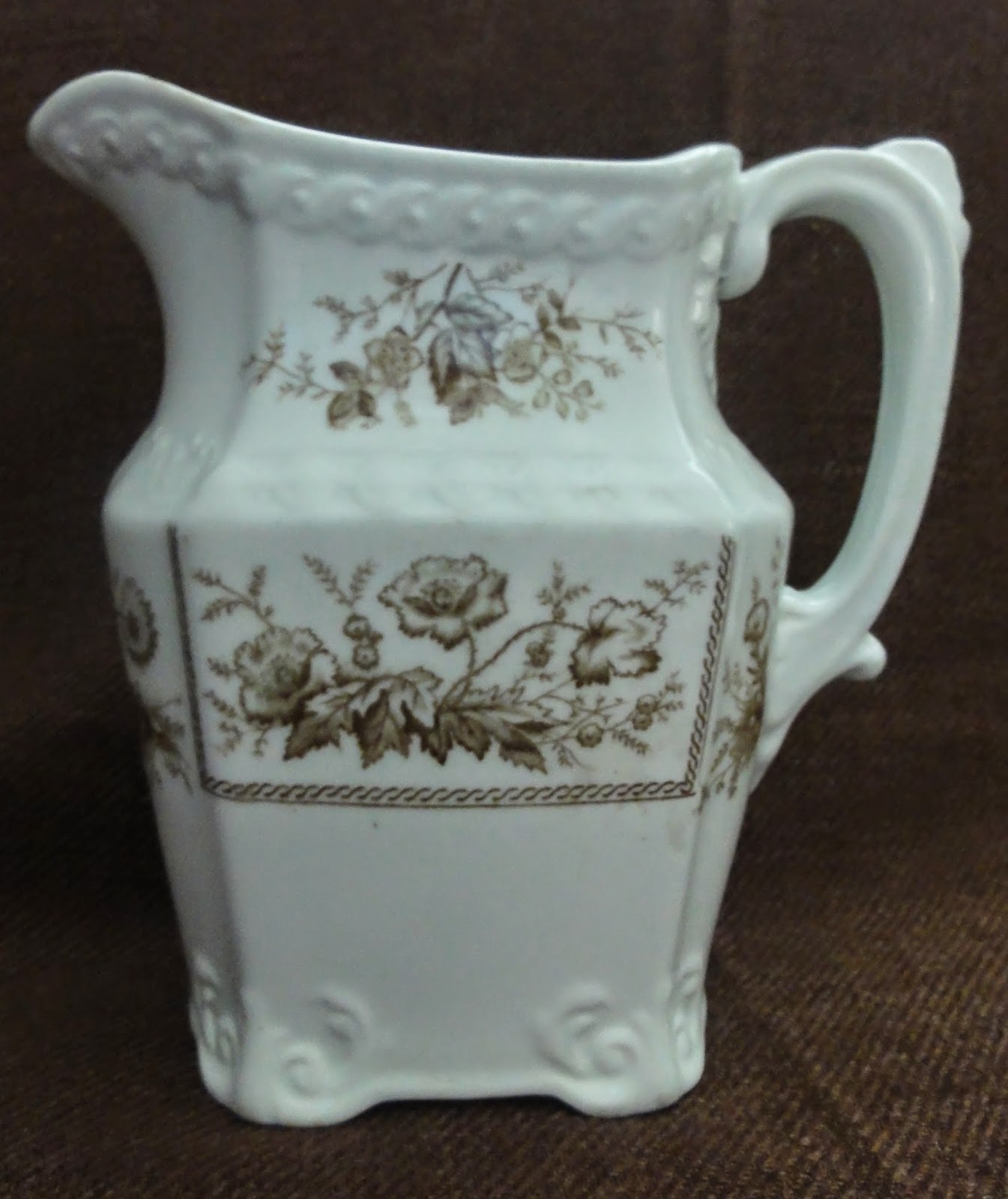 I don't know why I didn't realize until I got home that I had this soup bowl in the same pattern.  The soup bowl was my very first brown transferware purchase many years ago. The prices on these 'new to me' treasures were quite reasonable, so I didn't hesitate to add them to my collection. 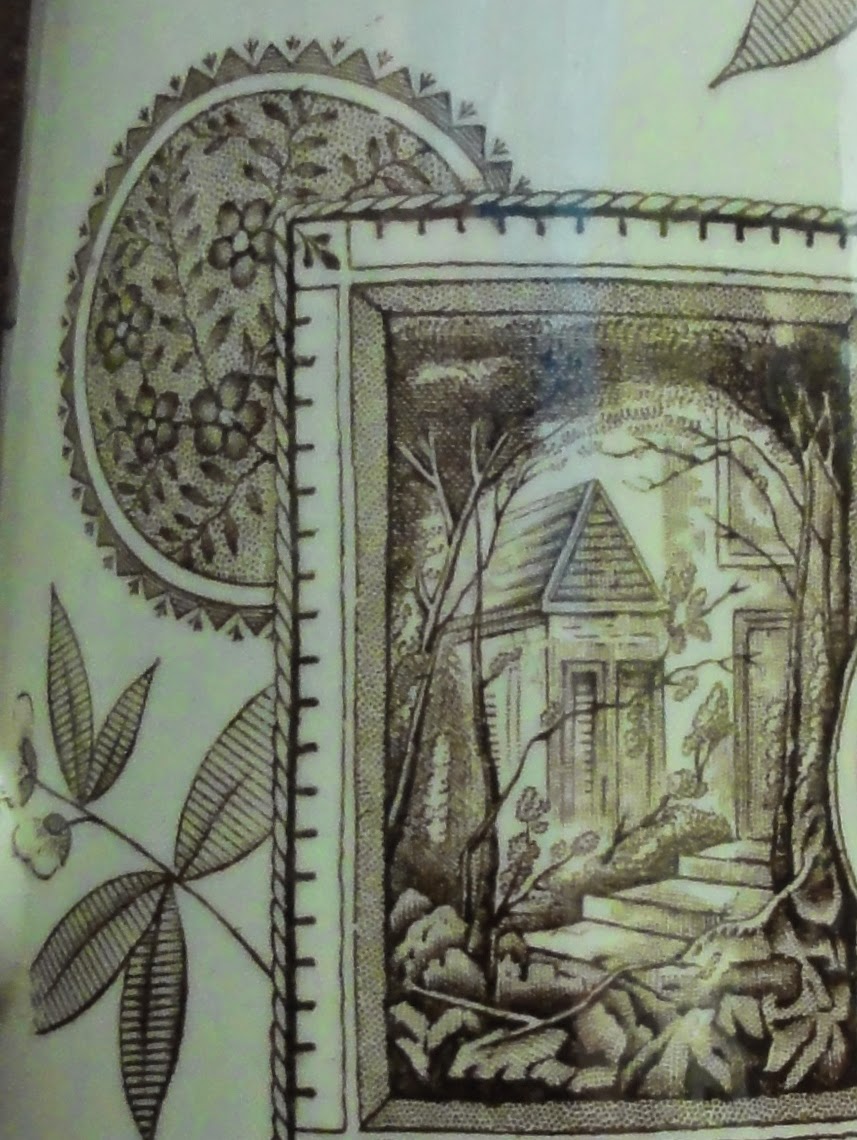 My faith is restored in my "hunt and gather" obsession.  There is still some brown transferware out there for me to find.

I'm joining the following:
French Country Cottage for Feathered Nest Friday
Pieced Pastimes for Saturday Sparks
Southern Hospitality for Thrifty Treasures
Boogie Board Cottage for Masterpiece Monday
My Uncommon Slice of Suburbia for Inspire Me Monday
Confessions of a Plate Addict for The Scoop Tuesday
Our Home Away from Home for Tuesdays at our Home
A Stroll Thru Life for Inspire Me Tuesday
Knick of Time Interiors for Knick of Time Vintage Tuesday
Green Willow Pond for What We Accomplished Wednesday
Ivy and Elephants for What's It Wednesday
Savvy Southern Style for WOW Us Wednesdays
Have a Daily Cup for Share Your Cup Thursday
From My Front Porch to Yours for Treasure Hunt Thursday

My oh my oh my! I keep telling myself that my collection is big enough, but I would have a desperate time passing up these pieces. And your collection is much larger than mine. The small pitcher is my favorite. Pitchers are my latest mania and I also have a few bowls in that same pattern, but they aren't in good condition. And love the platter too! I can just get lost in the gorgeous patterns. You must be thrilled! I am!

I saw a beautiful Christmas display of brown patterned dishes on Pinterest and I have come to love the look of the brown transferware. Thank you for sharing your lovely purchases. You found some really nice things.

Oh, you found some pretties! How cool that you already had the tureen to match the platter. I love that border as well, and Aesthetic pieces are some of my favorites! Love seeing your collection!

Gorgeous and I love that you had pieces to match each of your finds. How fun is that Sally? Thanks for sharing with SYC.
hugs,
Jann

Oh, you lucky girl!!! Those are great finds!! I recently found some pieces also, they are on my blog....go take a peek. Brown is my favorite and love the Aesthetic period pieces. Thanks for sharing...I'm just a little jealous!!!

All of these pieces are gorgeous! I think they would be amazing at Thanksgiving.

Lady of the Manor said...

OOOh, lucky lady! Finds like these make antiquing SO much fun! Enjoy them!!!

Isn't it strange you can go so long without finding your collection and then find several in a sort time! I do that all the time. Your collection is wonderful. Enjoy them.
cathywhatisoldisnew

Like you I like the brown and white transfer ware, maybe because it's a bit different. Even harder to find is black and white.

I collect ironstone and transferware. I started with red, added green, even have some in a weird shade of rust but don't have any brown. All that I have seen has been out of my price range. You found some lovely pieces. I love the Meakin!

I love transferware too! I know what you mean about brown being hard to find. Love those pieces -Jennifer

Tea in the Library said...

Nothing like the thrill of the hunt! Great finds!